More new stuff headed into stores from DST this week 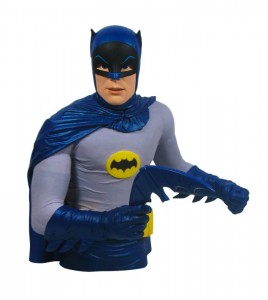 Despite it being crunch time and only a week out from Christmas Day, DST has a fresh new round of awesome stuff in stores this week. First and foremost is more Batman ’66 merch in the form of the Batman himself and Robin, as portrayed by Adam West and Burt Ward in the classic TV show. Now, these ate technically banks, but as anyone who buys DST’s banks regularly can tell you, they’ll double as busts pretty wearily and should look pretty spiffy on a comic library shelf, or right on your desktop.

Next up we’ve got another set of Marvel Zombies Minimates. This new four-pack features undead versions of Dr Doom, Kingpin, Sabertooth (I still can’t figure out how he could be a zombie), and Morbius- who I guess is now a non-living vampire. Man, Marvel Zombies makes no sense.

Finally, there’s a bottle opener made in the image of the classic robot Robbie from Lost in Space. And that’s something that might come in handy right about now as the Holidays are most definitely upon us… Have a look below at what’s in stores right now and then get out and grab some of the goods for yourself.

Jason's been knee deep in videogames since he was but a lad. Cutting his teeth on the pixely glory that was the Atari 2600, he's been hack'n'slashing and shoot'em'uping ever since. Mainly an FPS and action guy, Jason enjoys the occasional well crafted title from every genre.
@jason_tas
Previous Meet Wraith: The new Evolve monster revealed
Next Lords of the Fallen sequel officially on the way