Twas the week before Christmas and all through the comics shop, new issues were releasing, carrying on some of the biggest arcs to hit the big two this Fall/Winter. 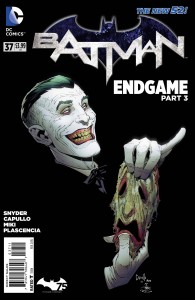 So first off, if you’re following along with any/all of the big multi-books crossovers currently going on in comics-land, then this is going to be an expensive week for you. Spider-Verse continues to web-up Spidey and co with Scarlett Spiders #2 and Spider-Woman #2. While that’s one corner of the Marvel U, Axis continues to mix and mash the heroes and villains you love with Avengers and X-Men: Axis #8, Axis Hobgoblin #3, InHuman #10, and Axis Revolutions #4.

GodHead also continues in the pages of Green Lantern: New Guardians #37 and, while not exactly a crossover, DC’s Amazo Virus storyline continues to roll with Justice League #37. It’s kind of can’t miss if you’re a fan of the League and all the weird stuff that’s been happening in that book (with Luthor and all). Also not to be missed this week is Batman #37, which continues Endgame, Criminal Macabre: Third Child #4, and the Identity Crisis 10the anniversary hardcover edition. Though I have to admit, I can’t really believe it’s been a decade since IC…

Anyway, here’s the rest of my picks as to what should be keeping you home reading instead of Holiday shopping this week. And if you want the full listing of what’s on the way to stores, click here for Previews’ listing page for the week.

Jason's been knee deep in videogames since he was but a lad. Cutting his teeth on the pixely glory that was the Atari 2600, he's been hack'n'slashing and shoot'em'uping ever since. Mainly an FPS and action guy, Jason enjoys the occasional well crafted title from every genre.
@jason_tas
Previous Xbox One takes the crown for sales in November
Next Oh boy, looks like there might be another Super Mario movie happening