Hulk battles Thanos in a cosmic brawl next month

The first issue of Marvel’s Hulk/Thanos throw down is almost here. 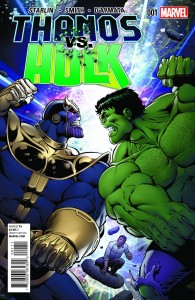 The Green Goliath goes toe-to-toe with the Mad Titan for a universe shaking cosmic throwdown in THANOS VS. HULK #1 – the first issue in a brand new limited series kicking off this December! Legendary creator Jim Starlin (Infinity Gauntlet, Thanos: The Infinity Revelation OGN) returns to answer the question – is Hulk really the strongest there is? Abducted by Pip the Troll and dragged halfway across the galaxy to be ransomed to Annihilus, Hulk is already angry. You wouldn’t like him when he’s angry. But Annihilus has plans of his own – plans that will put the Incredible Hulk directly in the path of Thanos, the Mad Titan! Guest starring Iron Man, Blastarr, S.H.I.E.L.D. and more, be there when Jim Starlin brings two of the Marvel Universe’s heaviest hitters to planet shaking blows in THANOS VS. HULK #1 this December!

Shall we count off the reasons to be excited about this one? For starters, it’s Hulk and Thanos. Fighting each other. That’s just cool. Beyond that, you’ve got appearances by Iron Man, Blastarr, and freaking Pip the Troll! What’s not to like for an old school Marvel fan?

Then of course, you have Jim Starlin at the helm. This being a decidedly ‘cosmic’ level mini-series, that alone makes it worth the price of admission as few writers have as great a handle on the universal side of Marvel like he does, and with him handling the art chores as well- it should be a downright fantastic book all around. Well, I think so anyway, but then I always liked Starlin’s work and Infinity Gauntlet is one of my favorite crossover events in all of comics.

Thanos vs Hulk #1 arrives on the racks on December 3rd.

Jason's been knee deep in videogames since he was but a lad. Cutting his teeth on the pixely glory that was the Atari 2600, he's been hack'n'slashing and shoot'em'uping ever since. Mainly an FPS and action guy, Jason enjoys the occasional well crafted title from every genre.
@jason_tas
Previous Sonic Boom! It’s the Nintendo Download
Next Fan petition gets SOCOM OST’s released on CD