The House of Ideas will once again be present in a big way at the New York con this week, including plenty of panel presentations on comics, film, and what’s in store for the future. 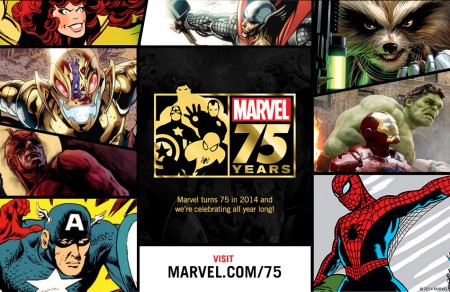 Always a company that puts on a pretty great show at cons, Mighty Marvel will have a plethora of panels for fans to lineup for. The Logan Legacy, Marvel Animation, Guardians of the Galaxy, the future of the X-Men and Netflix’ Daredevil TV show are all on the blotter and will be hot events for fans. There are plenty more as well, and as usual pretty much all of them are as ‘must attend’ as you can get if you’re a big fan.

The Marvel booth on the show floor will also be playing host to an assortment of signings, giveaways, contests and live events, so make sure you visit booth #1354 often. Now bust out those planners and smartphones and get ready to copy and paste, here’s your list of panel presentations:

For the first time in 75 Years, retailers will be able to engage with editorial in a no-holds-barred Q&A on the future of the Marvel Universe!  This panel is open to retailers ONLY – For more information on how to attend, check the Marvel Mailer!

*Ticketed event. Must have additional ticket for entry.

X-Men- The Shifting Face of Mutantkind

Join X-Editor Michael Marts as he sits down with the renowned X-Men creators who have shaped the mythos of mutantkind! This retrospective panel takes fans through the X-Men’s publication history and gives them an inside look into the creative process behind fan-favorite characters and books! A can’t-miss-panel for any mutant-lover! Panelists include Fabian Nicieza (Classic X-Men), Chris Claremont(Uncanny X-Men), Len Wein (Wolverine), and other special guests!

Have a passion for the inner workings of the comics industry? Curious about breaking into the field as a writer or artist? Sit down with a group of Marvel professionals from every corner of the business, and get insider tips, advice, and first-hand accounts of what it takes to start a career in comics today! Panelists include Talent Scout Jeanine Schaefer, Russell Dauterman (Thor), Kelly Sue DeConnick (Captain Marvel), Gerry Duggan (Nova), Sam Humphries (Legendary Star-Lord), and Charles Soule (Death of Wolverine)!

World Outside Your Window – Diversity in Marvel Comics

Take a look inside Marvel’s ground-breaking history, as we shine the spotlight on the creators who challenged, re-defined, and shaped Marvel’s perception as an innovative publisher of comics. Join Marvel’s Editor-in-Chief Axel Alonso and a mighty gathering of Marvel creators as they discuss the importance of diversity in comics and how Marvel upholds the tradition of presenting the world outside your window.  Panelists will include Kurt Busiek (Marvels), Kelly Sue DeConnick (Captain Marvel), Kieron Gillen (Young Avengers), Ann Nocenti (Daredevil), and other Mighty Marvel Guests!

Guardians of the Galaxy- Then and Now

The Evolution of the Marvel Cosmic Universe

Following the smashing success of Guardians of the Galaxy, we decided to take fans through the history of one of Marvel’s quirkiest teams, as well as Marvel’s cosmic universe at large! This 75th Anniversary panel will feature current “cosmic” creators, as well as the writers and editors who shaped Marvel’s cosmic universe! Join us as we go back in time, and get an exclusive look inside the creation of some of your favorite space-facing characters! Panelists will include Gerry Duggan (Nova), Al Milgrom (Captain Marvel), Doug Moench (Inhumans), and Jim Starlin (The Infinity Gauntlet).

Love having the best comics in the industry on your mobile devices? Want to know how Marvel stays on the cutting edge of technology while bringing you what you love? Want to learn more about Infinite Comics? Well, this panel is for you, True Believer! Get exciting news from Executive Editorial Director of Digital Ryan Penagos and other guests including Talent Scout C.B. Cebulski, VP CRM Daniele Campbell and others!  Find out what’s happening with the Marvel Comics App, Marvel AR, new digital games, Marvel’s vast social media presence and more in this can’t-miss panel!

Join Marvel’s Chief Creative Officer Joe Quesada as he sits down with creators of past and present to shine the spotlight on Marvel’s street-level characters. This panel will include Spider-Man and Daredevil creators, as well as writers and artists who have contributed to the mythos of heroes like Spider-Man, Daredevil, Moon Knight, Luke Cage, and more! Panelists include Mark Bagley (Ultimate Spider-Man), Gerry Conway (Amazing Spider-Man), Tom DeFalco (Amazing Spider-Man), J.M. DeMatteis (Spectacular Spider-Man), Ralph Macchio(Daredevil), Doug Moench (Moon Knight), and Ann Nocenti (Daredevil).

Jeph Loeb (Marvel’s Head of Television) brings you the biggest animation panel in this universe – or any other. Get an exclusive first look at content from “Marvel’s Hulk and the Agents of S.M.A.S.H.” season two and the future of Marvel Animation.

Jeph Loeb (Marvel’s Head of Television) and Clark Gregg (Director Coulson) return with exciting news and the world premiere of an all new episode of Marvel’s Agents of S.H.I.E.L.D. before it debuts on ABC!

Get ready, X-Fans, for the biggest mutant on mutant showdown of the year in the pages of Death of Wolverine! Join a star-studded lineup of X-writers as they discuss the future of Logan and the impact his death will have on the rest of the X-Men titles! Plus, get the scoop on other titles starring Marvel’s merry mutants!  This panel will be jam-packed with X-Men creators, so no fan should miss out! Panelists will include Executive Editor Mike Marts, Brian Michael Bendis (All-New X-Men), Peter David (All-New X-Factor),  Gerry Duggan (Deadpool), Greg Pak (Storm), Charles Soule (Death of Wolverine), Len Wein (Incredible Hulk) and other Mighty Marvel Guests!

Join us for this Convention favorite! Here is your chance to Q&A with Marvel’s Chief Creative Officer Joe Quesada, for this no-holds-barredexposé on everything Marvel. Got a question about a favorite hero? Want to hear groundbreaking news straight from the source? Need a rundown on breaking developments in Marvel comics, film, and TV? This panel is for you!  With special announcements galore! Featuring Executive Editor Tom Brevoort, writers Brian Michael Bendis (All-New X-Men), Kelly Sue DeConnick (Captain Marvel), Gerry Duggan(Deadpool), Sam Humphries (Legendary Star-Lord), Dan Slott (Amazing Spider-Man), and other Mighty Marvel guests!

Join the Disney Infinity: Marvel Super Heroes team for a first-hand, behind-the-scenes look at the story behind what it was like to bring the Marvel Super Heroes to Disney’s expanding video game platform! The development team from Marvel, Avalanche Studios and Disney Interactive will dive into how the game has evolved, how the stories developed, and various other aspects of the creative process.  This unprecedented all-access look at this momentous game release is not to be missed!

Join the cast of Marvel’s Daredevil in their first-ever appearance with show-runner Steve DeKnight and moderator Jeph Loeb (Marvel’s Head of Television) to answer questions and reveal secrets from the hotly-anticipated show debuting on Netflix in 2015.

This exclusive panel is just for Marvel Unlimited Plus members!  Join Executive Editorial Director of Digital Ryan Penagos and top Marvel creators for a private panel discussion of what’s happening inside the Marvel Universe.  Get FREE merchandise, sneak peeks of upcoming Marvel comics, a Q&A session to answer all your burning questions, and more surprises to be announced.  Not to be missed!  Panelists will include Brian Bendis (All-New X-Men), Gerry Duggan (Nova), Dan Slott (Amazing Spider-Man), Nick Spencer (Avengers World), and Ryan Stegman (Inhuman)!  Marvel Unlimited Plus Members ONLY – show your Member Card or confirmation email at the door for access to the event!

From Ms. Marvel to Black Widow, from Twitter to tumblr, women in comics has been one of the most talked-about topics in the industry recently.  Join the conversation as women from every discipline in the creative process at Marvel discuss what it’s like working as a woman in comics today and what it means for the future of the industry!  Plus, plenty of special announcements! Panelists will include Talent ScoutJeanine Schaefer, Editors Sana Amanat, Katie Kubert, Ellie Pyle, and Emily Shaw, Associate Producer Judy Stephens, writers Kelly Sue DeConnick (Captain Marvel), Erica Henderson (The Unbeatable Squirrel Girl), Margi Stohl (Beautiful Creatures), and G. Willow Wilson(Ms. Marvel), and artists Marguerite Bennett (Angela: Asgard’s Assassin), Sara Pichelli (Guardians of the Galaxy), and  Stephanie Hans(Angela: Asgard’s Assassin)!

This is your panel for all things Spider-Man! Join us as we discuss  the most epic Spidey event of all time as every Spider-Man EVER comes together to face a world-ending threat!  Plus, get the low-down on Silk, the mysterious new character who has everybody talking!  Panelists will include Senior Editor Nick Lowe, writers Peter David (Spider-Man 2099), Christos Gage (Superior Spider-Man), Jason Latour (Wolverine and the X-Men), Dan Slott (Amazing Spider-Man), and Robbie Thompson (Spider-Verse), and artists Stacey Lee (New Warriors), Humberto Ramos (Amazing Spider-Man), Robbi Rodriguez (Edge of Spider-Verse) and more special guests!

Can’t make it to the convention? Follow along on the Marvel.com and @Marvel on Twitter, the best way to get exclusive photos and videos, real-time announcements from the convention floor and up-to-the-minute panel, in-booth, and signing schedules of all your favorite Marvel creators!

Jason's been knee deep in videogames since he was but a lad. Cutting his teeth on the pixely glory that was the Atari 2600, he's been hack'n'slashing and shoot'em'uping ever since. Mainly an FPS and action guy, Jason enjoys the occasional well crafted title from every genre.
@jason_tas
Previous Sasquatch’s days are numbered in Killing Bigfoot
Next EA giving out Dragon Age: Origins for free to Origin users