Meet Etherium’s subfactions in the newest round of campaign screens

Sure sci-fi RTS Etherium has its big playable factions that you’ll be expending the majority of your time playing with, but there are a whole mess of minor factions as well. 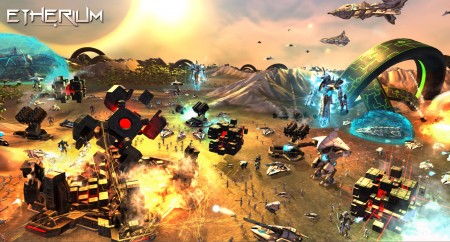 We’ve been talking a bit about old school RTS’ latest here on BG and Etherium definitely falls into that category, albeit with a very modern weather-controlling bent. Now developer Tindalos has taken the wraps off another of the game’s more interesting elements, the subfactions.

These groups, which are unique to each planet that you’ll be fighting on in the campaign, can either hinder you or join your cause and help in battle. In all, there are 6 minor factions that’ll be fighting across the three worlds in Etherium; the Guardians, the Intar, the Vectides, the Raiders, the Consortium, and the Parasites.

Of the groups announced, we know that the Guardians are to be massive beings who can reconstruct themselves on the fly, the Raiders are shockingly not a football team but a group of post-apocalyptic ‘skirmishers’, and the Parasites are an “alien force that fights in packs- never fewer than three”. All of them sound radically different, which is great since uniqueness can sometimes be in short supply in an RTS, and we haven’t yet met the other three either.

Etherium is looking sharp, s0 stay tuned for more from Gamescom about this one next week.

Jason's been knee deep in videogames since he was but a lad. Cutting his teeth on the pixely glory that was the Atari 2600, he's been hack'n'slashing and shoot'em'uping ever since. Mainly an FPS and action guy, Jason enjoys the occasional well crafted title from every genre.
@jason_tas
Previous X-O Manowar meets the Armorines this November
Next Feed (Book) Review