“Who pulled the trigger?” Your answer revealed in Original Sin #6. 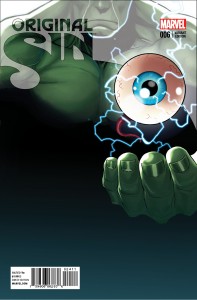 This July, the lingering question will be answered in ORIGINAL SIN #6 – who shot the Watcher? From the very beginning, fans have waited, wondered and speculated who was responsible for Uatu’s untimely death. Now, Jason Aaron and Mike Deodato peel back the curtain on the person pulling the strings as Original Sin races toward it’s heart-stopping conclusion.

Though the Watcher’s killer stands revealed, the knowledge Uatu kept cannot be put back in its bottle. The heroes’ most closely guarded secrets are now weapons in the hands of a terrifying enemy.

“It’s time for the shooter to come clean and to stand revealed—though this revelation will only lead to greater conflict for Marvel’s heroes,” says Marvel SVP Executive Editor Tom Brevoort. “It’s difficult to imagine a more dangerous opponent than the person who stands before them now.”

How can the heroes of the Marvel Universe cope with a threat that knows their each and every weakness? And who has been manipulating the actions of hero and villain alike? Prepare yourselves as Original Sin kicks into high gear and builds to a game-changing finale that will have everyone talking! No fan can afford to miss the twists and turns of ORIGINAL SIN #6when it explodes into comic shops this July!

Every issue of ORIGINAL SIN includes a code for a free digital copy of that same comic on the Marvel Comics app for iOS and Android devices. Additionally, each issue of ORIGINAL SIN features special augmented reality content available exclusive through the Marvel AR app – including cover recaps, behind the scenes features and more that add value to your reading experience at no additional cost.

Like sit says in the preview text above, just because the killer is out in the open, doesn’t mean that all the Original Sin happenings are over. With all the damaging secrets out in the open and Marvel’s pantheon still reeling from some of them and outright altered by others, it’ll be a good long time before the mega-event’s secrets are finally put to bed.

The Marvel Universe isn’t going to be the same after this one. And with even bigger things on the horizon, it isn’t likely to get ‘back to normal’ for some time… if ever.

Catch Original Sin #6 on the racks at your local comic shop on July 16th from the team of Jason Aaron and Mike Deodato.

Jason's been knee deep in videogames since he was but a lad. Cutting his teeth on the pixely glory that was the Atari 2600, he's been hack'n'slashing and shoot'em'uping ever since. Mainly an FPS and action guy, Jason enjoys the occasional well crafted title from every genre.
@jason_tas
Previous Orc Attack: Flatulent Rebellion (PC) Review
Next Battlefield Hardline Beta unlocks everything as it comes to a close this week