This Fall’s team-up event sees the X-Men and the Avengers working together to take down the newly Onslaught-powered Red Skull and his evil Axis. 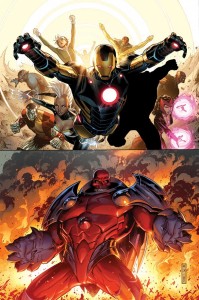 This October, the Marvel Universe prepares for the biggest battle its ever faced –Marvel is proud to present the first details for Avengers & X-Men: AXIS! AXIS, the nine part blockbuster comic event of the fall, brought to you by the chart topping creative team of Rick Remender, Adam Kubert, Leinil Yu, Terry Dodson and Jim Cheung, will take fans across the globe as the Avengers and the X-Men must band together to stop the destruction caused by one of the greatest villains in the Marvel Universe!

From the ashes of the once proud mutant haven Genosha, an evil power rises. Exploiting the limitless gifts of the world’s greatest telepath Charles Xavier, the Red Skull has enslaved thousands, amassed an army and now broadcasts his message of hate across the world. Channeling the unstoppable force known as Onslaught, the Red Skull’s ruthless and unparalleled evil now wields a destructive power unmatched by even the most powerful heroes.

The fractured teams of Avengers and X-Men are now all that stands in the way of total obliteration. Earth’s last hope now hinges on the fragile alliance of these two estranged teams. In the shadows of the Red Supremacy, can they fight as one? Even united, they may not be enough to stem the coming darkness. And if they fall, all hope is lost.

The battle begins this October in Act I of Avengers & X-Men: AXIS but fans anxiously awaiting the explosive first issue can get their first teases in March to AXIS, special lead in stories setting the stage for the epic event! The March to AXIS begins this September in Uncanny Avengers #24, Captain America #24, Magneto #9 and Loki: Agent of Asgard #6!

Far from at the each other’s throats as they were in last year’s AvX, it’s pretty awesome to see the Avengers and the X-Men teamed up in a massive crossover event like this. I have to say too, it’s just plain cool to see how Marvel worked in Onslaught. Even though the Skull looks just a tad silly decked out in that massive set of armor, the Xavier alter-ego hasn’t been seen since he first appeared back in the 90s in the event that led to the Heroes Reborn initiative. 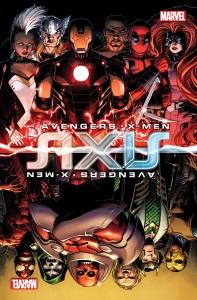 As maligned as that was too, it actually birthed some pretty nifty stories and made the characters in the Avengers and Fantastic Four relevant again and pushed them up tot the fore of Marvel’s monthlies. Of course, they certainly don’t need that now (not the Avengers anyway), but it’s perhaps hinting at some major shifts to the Marvel U since Onslaught was so disruptive to the time stream last time around. And then there is that other time-related storyline happening at roughly the same time too- might we be seeing a reboot of sorts if all these arcs combine into a massive event for 2015?

Maybe so. In the meantime though, Avengers & X-Men: Axis kicks off the Skull’s latest evil scheme this Fall with Uncanny Avengers #24, Captain America #24, Magneto #9 and Loki: Agent of Asgard #6- stay tuned for more as we head into SDCC next month.

Jason's been knee deep in videogames since he was but a lad. Cutting his teeth on the pixely glory that was the Atari 2600, he's been hack'n'slashing and shoot'em'uping ever since. Mainly an FPS and action guy, Jason enjoys the occasional well crafted title from every genre.
@jason_tas
Previous Wargame: Red Dragon (PC) Review
Next GTA Online’s ‘I’m not a Hipster’ pack arrives