The new comics-focused NYC con will have panel presentations and more, courtesy of Valiant Comics. 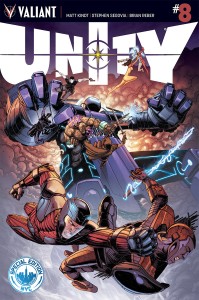 If you’re unfamiliar, Special Edition is the newest comic con coming to New York City. Brought to you by the same folks that bring NYCC to the Jacob Javits Covention Center every October, Special Edition focuses solely on comics, like the conventions of decades past. You won’t find any talk of video games or movies here (well, maybe some) as Special Edition is all about the printed page and that classic medium of the comic book.

As such, you can expect the big publishers to all be present and accounted for, including Valiant Comics. Valiant has a special edition (no pun intended) of their popular Unity team-up book on hand and ready for the show. Looking for panels and signings? Yep, they’ve go them too; here’s your rundown:

Then, join us on Sunday, June 15th at 11 AM in Theater A – 1E19 for the VALIANT Presents VALIANT FIRST: ARMOR HUNTERS AND BEYOND panel presentation! As New York’s own Valiant Entertainment steamrolls into yet another super-summer, find out what the future holds for their power-packed VALIANT FIRST line-up of new series – including RAI, ARMOR HUNTERS, THE DELINQUENTS, THE DEATH-DEFYING DR. MIRAGE, and more! Join an all-star panel of Valiant creators and staff, including Joe Harris (Armor Hunters: Bloodshot), Robert Gill (Armor Hunters: Harbinger), Executive Editor Warren Simons, and Chief Creative Officer Dinesh Shamdasani, for an exclusive round of news, artwork, and announcements right here, only at Special Edition: NYC!

Jason's been knee deep in videogames since he was but a lad. Cutting his teeth on the pixely glory that was the Atari 2600, he's been hack'n'slashing and shoot'em'uping ever since. Mainly an FPS and action guy, Jason enjoys the occasional well crafted title from every genre.
@jason_tas
Previous E3 2014: Star Fox for Wii U confirmed
Next E3 2014: Xenoblade Chronicles X screenshots