The Idea of a haunted mirror might not sound scary. The feeling of the unknown is much more creepier than something that is explained, which is something Oculus does well.

You never really know who the lady is who resides in the mirror, or why she’s haunting it. The real gold mine in this movie is just how she manipulates and haunts people’s minds through the mirror. She gets inside the persons mind and makes them see exactly what she wants them to see, this plays on your mind throughout the film as you can never be sure if what is happening is real or a product of the mirror. 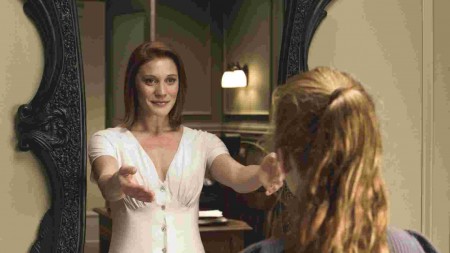 The story of Oculus follows a brother and a sister whose parents were murdered 11 years ago. The story, which the police are using, is that a crazed father tortured and killed his wife, before being shot by his son. The boy is placed in a mental institution.

When we pick up the story he has been released. His sister contacts him and tells him he must help her destroy the evil that lives in the antique mirror that used to hang in their childhood home. And to that end, she has rented the mirror and brought it back to their childhood home. With this she has also brought cameras, lights, timers and a fool proof mechanism which will destroy the mirror, should anything happen to them.

The brother has gone through therapy to help him forget and as such doesn’t believe his sister and tries to disprove her. What happens here is a clever series of flashbacks which intertwine and tell the story from two very different perspectives, and leads to a dramatic conclusion.

The best part of the film was the uneasy feeling you get from never truly knowing what was real and what was the evil playing on your mind. The plot is original, the camera angles creepy as hell and the actors performances were spot on. Definitely worth watching, just remember to pay attention at all times.