The Japanese collectible and statue maker has some awesome stuff on tap for the remainder of 2o14, including Halo’s Master Chief, Arrow from DC Comics, Jason from Friday the 13th reimagined as a woman, and Attack on Titan’s Eren Jaeger.

After something of a dry spell, the company that’s well known for producing high-end, super-high quality statuary is back and in rare form with a little something for everyone. We had the chance to check out their wares a Toy Fair this past February, but early prototypes are no substitute for the real thing.

Here’s your full rundown of what you can be on the lookout for in 2014, complete with release dates and price tags (in USD): 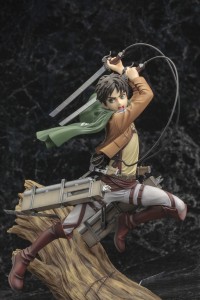 A KOTOBUKIYA Japanese import! The next new addition to the ARTFXJ lineup (a bold new expansion designed “to bring classic Japanese characters to their fans worldwide”) is possibly the most popular anime and manga property in the world right now, Attack on Titan! Created in 2009 by Hajime Isayama, Titan tells the story of humanity living behind walls to protect itself from huge humanoid creatures. Headlining the new ARTFXJ lineup is the series’ main character EREN YEAGER! After witnessing the death of his mother at the hands of a Titan, Eren would go on to join the elite Survey Corps to fight the giants using the group’s Three Dimensional Maneuver Gear… and that’s exactly how he’s captured in ARTFXJ form. Yeager leaps forward in mid-attack, swinging off of the tree at his base and reaching back with his dual swords to strike a huge blow! The defender of humanity wears his iconic Survey Corps uniform complete with the complex 3D Maneuver Gear, and the sculpt captures all of the intricate details of the mechanisms along with the subtle flow and wrinkling of his clothing. Fully engrossed in his attack on a brutal Titan, Eren lets loose a mighty battle cry with a fantastic screen accurate facial sculpt. Sculpted by Shin Tanabe, Eren Yeager is just under 10 ½ inches tall (1/8 scale) in his leaping pose atop the detailed georama base. Don’t miss out on what’s sure to be a highly sought after collectible, and watch out for more Attack on Titan ARTFXJ statues coming soon from Kotobukiya! 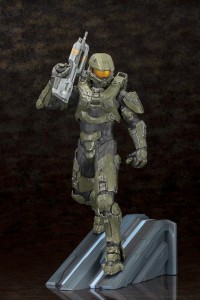 A KOTOBUKIYA Japanese import!   The fans have demanded it, and now Kotobukiya returns triumphantly to the best-selling Halo® series with an all new MASTER CHIEF ARTFX Statue!  Stepping right out of Halo 4, the mega popular video game character wears his MJOLNIR Powered Assault Armor and strides down a high tech ramp in a Forerunner facility.  The Chief carries his trusty Battle Rifle and comes equipped with two sets of interchangeable arms that let you pose the hero with weapon at the ready or held over his shoulder with a frag grenade in the other hand!  The intricately sculpted armor captures every detail you know from the game with screen accurate two-tone green armor to his iconic gold hued visor.  There’s even limited articulation at the neck and waist so you can create your own poses!  Sculpted by M.I.C., Master Chief ARTFX stands nearly 12 inches tall and makes for a perfect centerpiece for your Halo collection.  Watch for more ARTFX and ARTFX+ Halo statues coming soon from Kotobukiya!

© 2014 Microsoft Corporation.  All Rights Reserved.  Microsoft, Halo, and the Halo logo are trademarks of the Microsoft group of companies. 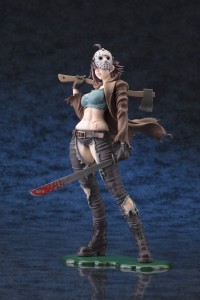 A KOTOBUKIYA Japanese import! You’ve never seen your favorite horror movie icons like this! Kotobukiya brings a bold new direction to their popular series of Bishoujo Statues with the Freddy vs. Jason pair up, and following after Freddy is a new character interpretation by Shunya Yamashita of the slasher JASON VOORHEES! The Friday the 13th series began in 1980 with murders at Camp Crystal Lake, though it wasn’t until the sequel that Jason put on the famous mask and took matters into his own hands. Through successive sequels Voorhees would leave a trail of bodies from Crystal Lake to Manhattan, hell, and even the future before coming into conflict with Krueger in Freddy vs. Jason. Yamashita and Kotobukiya’s version of the slasher takes its inspiration from Jason’s on screen look but mixes in a beautiful girl in the bishoujo style. Voorhees stands in a relaxed pose in her tattered pants, top, and jacket with the iconic machete in one hand and an axe held over her shoulder. The scraps of her clothing reveal quite a bit of skin and her muscular physique, while her cute face is partly obscured by the nightmarish hockey mask strapped to the side of her head! Sculpted by Takaboku Busujima (Busujimax), Jason stands over 8 ½ inches tall (1/7 scale) on a specially designed base. She’s a totally unique addition for your collection, and the perfect companion to the Freddy Krueger Bishoujo Statue! 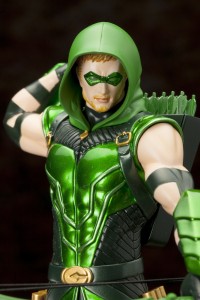 A KOTOBUKIYA Japanese import!  The latest DC Comics ARTFX+ Statue from Kotobukiya returns to the pages of the New 52 with a popular and colorful character, GREEN ARROW! Introduced all the way back in 1941, billionaire Oliver Queen was marooned on a deserted island and there learned to survive by the way of the bow. Taking those skills back to civilization after being rescued, “Ollie” would take on the identity of Green Arrow and fight crime in Star City and Seattle, though his adventures with the Justice League would take him all around the world and beyond. In the New 52 Green Arrow continues to defend the innocent as he investigates the truth of his past and what shaped him as a hero.

The Emerald Archer appears for the first time in the ARTFX+ lineup, posed with a wide stance as he scans for enemies and prepares to draw an arrow. Oliver wears his New 52 costume featuring a black and green outfit that leaves his arms mostly bare for shooting. With reinforced boots, a padded chest piece, and armored gauntlets Green Arrow is ready for anything, and the gold accents shine on his buckles and arrow emblem belt buckle. The archer holds his bright green bow sideways in front of him, ready for nocking an arrow from the full quiver on his back. Wearing his trademark green hood and mask, the focused hero still shows off a bit of his blonde hair and scruffy beard.

Sculpted by Atelier Bamboo, Green Arrow stands over 7 ½ inches tall (in the ARTFX+ 1/10th scale) and makes for an excellent display piece standing on his included base which he connects to via the magnets in his feet. Add the Emerald Archer to your DC Comics New 52 ARTFX+ collection!

Jason's been knee deep in videogames since he was but a lad. Cutting his teeth on the pixely glory that was the Atari 2600, he's been hack'n'slashing and shoot'em'uping ever since. Mainly an FPS and action guy, Jason enjoys the occasional well crafted title from every genre.
@jason_tas
Previous Peter Parker has a tough road ahead in Amazing Spider-Man #1.2
Next Metro pulls onto next-gen consoles and the PC with Metro Redux