Microsoft’s new push into the world of television will be headlined by one of publisher IDW’s coolest properties- the frigid neo-Ice Age tale, Winterworld. 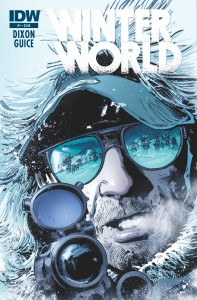 “Xbox is recognized globally for their groundbreaking creativity. IDW Entertainment could not ask for a better partner to bring Winterworld to life,” said David Ozer, President of IDW Entertainment, “We are thrilled to be working with them during this exciting time in their growth.”

Growth indeed. TV is a brand new sector for the Xbox company, who’ve never done anything quite like this before. With a Steven Spielberg-produced HALO movie and/or series at the fore though, it seems like they’re pretty serious about the Xbox One’s televising future. Now with Winterworld, a classic originally published in the late 1980’s, there’s even more reason to lok forward to what might be on tap.

Winterworld, which we actually profiled earlier this year, heads back to comic shops this Summer (irony!) and takes place in the midst of a new Ice Age where humans find themselves struggling to adapt to the new snowball Earth. Tribal warfare and the total breakdown of society highlight the tale from veteran comic scribe Chuck Dixon and Jorge Zaffino.

“To see my stories and Jorge’s powerful images brought to life will be a serious thrill,” said writer Chuck Dixon, “We have the right partners and the right format to really make this something special. It’s an exciting time in comics and in entertainment overall and I am very pleased that Winterworld will be a part of it.”

Details aren’t overly heavy on this one right now (thought that could be said of all the Xbox TV shows), but we do know that Ted Adams and David Ozer of IDW Entertainment will be involved with production and Rick Jacobs and Dave Alpert from Circle of Confusion are also on board. Look for more info on Winterworld, from Xbox Entertainment Studios, some time in the near future.

Jason's been knee deep in videogames since he was but a lad. Cutting his teeth on the pixely glory that was the Atari 2600, he's been hack'n'slashing and shoot'em'uping ever since. Mainly an FPS and action guy, Jason enjoys the occasional well crafted title from every genre.
@jason_tas
Previous Dark Horse launches Project Black Sky into webcomic
Next Full Bore goes… full bore on the PC