Back in the days when Wade was more of a villain and less of a lovable psychopath, Cable and X-Force trailed the merc with a mouth through time on a journey to save history. Yes, really. 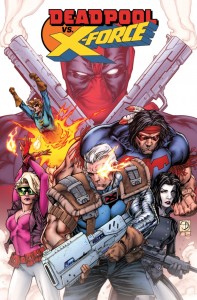 Journey back to the days of the 1990s, when two characters debuted who would change the face of comics – Cable & Deadpool! Today, Marvel is proud to announce the exciting DEADPOOL VS. X-FORCE, a new limited series from the explosive creative team of Duane Swierczynski and Pepe Larraz! In this all-new tale, we learn of the pair’s first meeting, well before their first comic book appearance inNew Mutants #98, as Cable and his soon to be X-Force race through the timestream to stop the reckless mercenary Deadpool before he destroys American history for good!

“Deadpool’s gone back to key points in American military history: the Battle of Germantown during the Revolutionary War; Gettysburg during the Civil War, and then… well, I can’t say anything else, because you know how one little musket ball has a funny of changing the course of human events,” says series writer Duane Swierczynski.

Harkening back to the earliest days of X-Force, this series promises to offer a time-jumping tale featuring that truly resonates the style and tone of the 90’s as Swierczynski is quick to emphasize, “OH THERE WILL BE GUNS, 90s style, although in some cases they’ll be fused with some old-school killing machines.”

“Every script I get from Duane is a blast and a half–and then Pepe gets a hold of it and really kicks it into high gear, says series Editor Jordan D. White. “For fans of the 90s, the American Revolution, and everything in between, this is going to rock.”

This July, join the Cable and his band of mutants, X-Force, as they hunt Deadpool through time to prevent him from forever altering the history as we know it! Can Cable and X-Force stop him before burning down the fabric of American history? And will they set things right, even if it means their own destruction?

Time travel, big pockets and even biggest guns; yep, it’s the ’90s alright. One of my personal favorite eras in the world of comic books, the 1990s was influential in the medium for a myriad if reasons. Chiefly, it introduced some characters (for a bunch of publishers) that are not only still around today, but thriving.

Take Cable and Deadpool for instance. The original lineup of X-Force might not be doing all that well (what happened to Boom Boom anyway?), but those two characters who spun out of the book are mainstays in the Marvel U and are still super-popular. Seeing them in action again, in their original costumes and alongside the full original team is a real treat for old school fans like myself.

I’m not sure why Marvel picked now to travel through the timestream and place an all-new story in the 1990s era, but I’m glad they did… Even if it sounds absolutely insane. And it does.Catch Deadpool vs X-Force #1 (of 4) when it warps onto the racks this July from Duane Swierczynski and Pepe Larraz.

Jason's been knee deep in videogames since he was but a lad. Cutting his teeth on the pixely glory that was the Atari 2600, he's been hack'n'slashing and shoot'em'uping ever since. Mainly an FPS and action guy, Jason enjoys the occasional well crafted title from every genre.
@jason_tas
Previous Meet Murdered: Soul Suspect’s Bell Killer in the game’s new trailer
Next Godzilla roars on EPIX this MemROARial Day