The absolutely massive The Elder Scrolls Online arrives to absorb your life into the world of Tamriel all over again, but does the famous fantasy universe work in a massively multiplayer setting?

Foreword Note: I did not finish the game, nor come close. I played the game for about 20 hours for this review, which for a game on a scale as big as this, was probably nothing more than getting my feet wet. So keep that in mind, now lets get started- 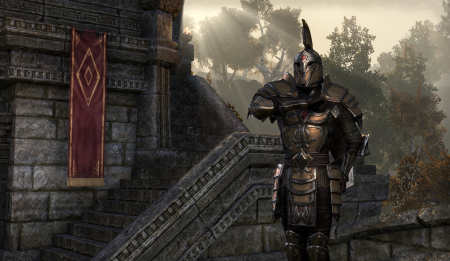 I hope you’re grateful for this review by the way, since I had to pry myself away from the game to actually get it done. Throughout my whole life playing video games, there’s only really ever been a handful of MMO games that I love wholeheartedly. Not even World of Warcraft, the essential god of MMO games, managed to hold my attention for more than a week (and realistically not even that). The Elder Scrolls Online though, well, this one not only manages to capture my attention, it locks it in a cage.

TESO starts out true to the current Elder Scrolls theme of waking up as a prisoner, only this time instead of being captured by those Imperial scum, you are chained up in a small cell underground (I assume it’s underground, anyway). A shimmering apparition known as The Prophet actually awakens you and helps you out into the open, where you find that you are not the only prisoner in this godforsaken dungeon.

After partnering up with a fellow prisoner, you find the physical body of The Prophet. Your partner decides to switch places (don’t ask how, just go along with it) with The Prophet, in order to free him and help you stop the main villain, Molag Bal, from returning to the physical realm and enslaving all of known creation. 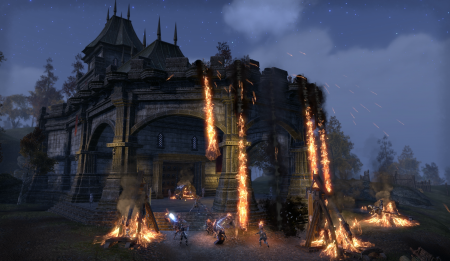 Realistically though, the opening is not as exciting or adrenaline filled as it sounds. As much as I love this game (and I really do love this game so far), it has a fair amount of flaws. For starters, the story of the main quest sounds very interesting and exciting, but while actually playing the game, I feel no pressure (which some people may like) to continue on and further the actual plot. This sense of un-urgency left not only me, but my place in the story as well, feeling unimportant.

In all reality, if someone came up to me and said, “Listen, no rush, but there is a god of death and destruction coming to destroy us all, but um, no rush or anything… Just thought I’d tell you, take your time.”, not only would I not rush, I would probably think nothing of it. All I’m saying is, a little prodding here and there and provocation or reason to actually do something would be nice.

Another flaw is the voice-acting. Honestly, I can’t help but be sucked out of the immersion of game because it sounds like the actors did the voices in a restroom or a gymnasium. Every voice echoes like standing inside of a large, empty room; whether you are in a packed tavern, or a vast open forest.

The last flaw I’m going to point out, if for no other reason than I find it hilarious, is that when you summon a horse, your character makes the animation of whistling even though he emits no sound. Then after completing the silent whistle, the horse does not prance up from nearby, nor it gallop in from the distance. No, he simply… materializes next to you. Not a real problem per say, but hilarious nonetheless.

On the plus side, is pretty much everything else. Combat is near perfection and combines the wonderful combat system of Skyrim with the ability to use skills like most other MMO’s. The result is a recipe for one of the best combat systems I have ever seen in any title. Everything moves fluidly (except for the darn cumbersome bow, which feels like it takes an eternity and a day to fire one arrow), quickly, and perfectly. 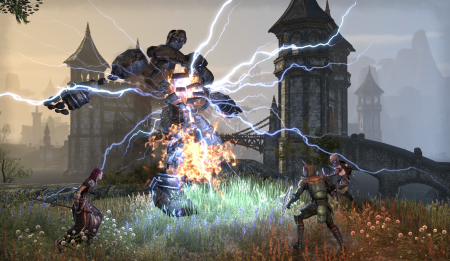 Speaking of near perfection, the graphics are wonderful and very close to (if not better than) the graphics from Skyrim. I have a minor complaint that the characters and some constructs, as well as the character animations, look more like something from a cartoon than an Elder Scrolls game.

Up next is music, but this is an Elder Scrolls game, did you really expect anything but some of the best, most adventurous music that you’ve ever heard? I’m not joking, the main theme is on par with Morrowind and the others. TESO’s audio is similar in many sounds to those games, yet unique in a way as well. In fact, out of the whole series, this draws very close to being my favorite main title theme- it’s just great.

Elder Scrolls Online is a fitting edition to the Elder Scrolls series and my minor complaints (like the near boring quest system), are nothing compared to my praise for the game. The price tag of at least sixty dollars, plus the fact that the game requires you to have a monthly subscription (which costs 15 dollars a month) might sound like it costs a bit too much, but I just bought four months-worth of subscriptions so what does that tell you?

I suggest playing on the EU server, because that’s what was suggested to me by Zenimax themselves. Also, while your choice of combat is solely up to you, I will say that magic at this point is extremely over-powered, and if you are playing the game by yourself and don’t want to rely on someone else, Sorcerer is the way to go.

Now, if you’ll excuse me, I have to get back to exploring the realm and summoning my faithful steed out of thin air.

Five parts actual review, 2 parts sarcasm, 2 parts bad puns, and one part self loathing = one of my game reviews.
Previous Dark Horse brings the Nightmare Carnival to town
Next The Troop (Book) Review