Get to know Marvel’s enigmatic Watcher before it all goes downhill in Original Sin #1 later this Summer. 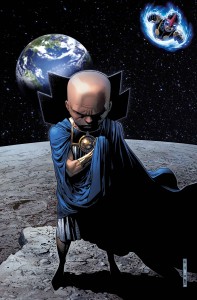 This April, the biggest Marvel Universe series of the year kicks off in ORIGINAL SIN #0 – from Eisner Award-Winning writer Mark Waid and blockbuster artist Jim Cheung!

Who shot the Watcher? And who now holds the deepest, darkest secrets of the Marvel Universe? All will be answered in Original Sin! But first – who is the Watcher? That’s what Nova is wondering after his latest brush with the moon-dwelling enigma he’s encountered before!

“If you know nothing about Uatu, or you’re not up on what his deal is right now, the story in Original Sin #0 will give you all of the information you need,” says Marvel Executive Editor Tom Brevoort in an interview with Marvel.com. “[Presented] in the context of an emotionally affecting story featuring the Watcher and Nova – and leave you ready for him to turn up as a cold, dead corpse in Original Sin #1 and understand why that is so very unsettling and dangerous a situation.”

Join Nova as he uncovers a startling secret that will have a profound effect on the young hero, as well as prime the pump for the most cataclysmic event in Marvel history! The marquee comics event of the year kicks off this April in ORIGINAL SIN #0!

The Watcher isn’t exactly the best defined member of the Marvel pantheon, and his presence itself hasn’t been much of a factor in a while either, but he is without a doubt one of the most important and powerful. Tasked with watching the events of Earth and chronicling the human drama from afar by the council of Watchers, Uatu is set to be murdered in the massive Original Sin crossover event about to hit the Marvel U.

Aside from the death of the Watcher Uatu, the event will also uncover many a horrible truth about Marvel’s heroes and villains- some things that those characters would much rather see stay buried. We’ve previewed a few of those crossover books here on BG and it’s a pretty interesting premise as we might see superheroes who were allies turn against one another- maybe for good.

If you’re going to buy in, then it all starts here with a primer on the Watcher, what he can do, and just how Nova will fit into all this. Grab Original Sin #0 when it hits the racks on April 23rd from the team of Mark Waid and Jim Cheung.

Jason's been knee deep in videogames since he was but a lad. Cutting his teeth on the pixely glory that was the Atari 2600, he's been hack'n'slashing and shoot'em'uping ever since. Mainly an FPS and action guy, Jason enjoys the occasional well crafted title from every genre.
@jason_tas
Previous Company of Heroes 2 goes to the Western Front
Next World of Tanks free weekend on Xbox Live