Home / News / Company of Heroes 2 goes to the Western Front

Company of Heroes 2 goes to the Western Front

New DLC for Sega’s Company of Heroes sequel begins in two new armies and a new theater of war in the Western Front. 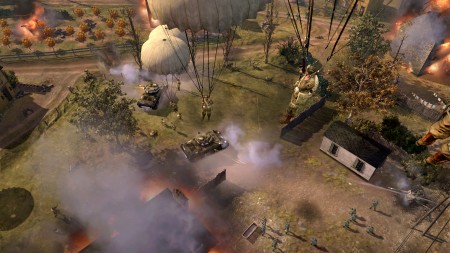 Company of Heroes 2 players looking to return to the European front have something to look forward to with the new Western Front Armies DLC for the real-time strategy game. The standalone multiplayer offering due this Summer will include the US army and the German Oberkommando West forces.

“We know how much fans love the setting of the original game and we have responded to their request to revisit the Western Front,” said Greg Wilson, Executive Producer at Relic Entertainment. “By offering Western Front focused content to Company of Heroes 2, we are giving players a brand new set of tactical options that significantly expand their multiplayer experience. At the same time, it has never been easier for new players to get access to our vast multiplayer community. “

Both new armies will have all-new tactical options, soldiers, weapons, vehicles, and more along with 8 new maps set in the western front in World War II. Gamers who own the core CoH2 game will also be able to play with the US and Germany across the game’s already existing 31 maps and over 1000 community-made maps that are on the Steam Workshop. That’a a lot of war to wage.

You’ll be able to grab the Company of Heroes 2: The Western Front Armies this June for $19.99 USD with all of the above, or for $12.99 USD for each of the two armies separately.

Jason's been knee deep in videogames since he was but a lad. Cutting his teeth on the pixely glory that was the Atari 2600, he's been hack'n'slashing and shoot'em'uping ever since. Mainly an FPS and action guy, Jason enjoys the occasional well crafted title from every genre.
@jason_tas
Previous The Walking Dead comics series on sale this weekend on comiXology
Next Original Sin #0 (Comics) Preview