Kang the Conqueror returns, and he’s got some very interesting friends. 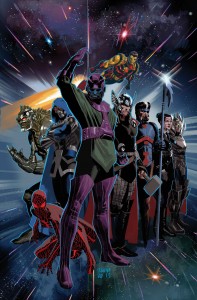 Kang the Conqueror has returned, and he’s brought some friends! This April, the blockbuster “Avenge the Earth” arc continues in UNCANNY AVENGERS #19, from the New York Times Best Selling Creative team of Rick Remender and Daniel Acuña! Assembled from the splintered fringes of time and space comes Kang’s Chronos Corps, and they’ve arrived on Planet X with a terrible offer. Now, Havok must reunite the surviving members of the Uncanny Avengers in a race against time to save the planet! But with Magneto and his human hunting X-Force closing in, how far is Havok willing to go to save all he holds dear? No fan can afford to miss the epic UNCANNY AVENGERS 19, on-sale this April!

Well now, this is an interesting development isn’t it?

Before I get toe the Chronos Corps, I have to add in that it’s great to see Havok getting the kind of starring role that he has here in Uncanny Avengers. I might not be the biggest fan of the book, or where it has headed with the whole ‘Planet X’ portion of the Avenge the Earth story arc, but I do like seeing Havok again since I was a big fan of the other Summers brother from his days as leader of X-Factor.

My mind might be changing on the whole story too as now we’re really starting to get into the nitty-gritty of the Marvel U’s time-travelling sector with Kang. It’s been no secret that there’s something going on with the timestream in Marvel’s superhero universe and it’s been heating up across a few books in the last few months. Now with Kang and his squad of really interesting characters behind him getting involved, I’m hopeful that there’s a lot more to come on that front sooner than later.

And that team is pretty awesome too. Not only do we get Kang, a longtime Avengers bad guy, but there’s also the awesome version of Dr. Doom from 2099, Earth-X Venom, Ahab (how long’s it been since we saw him?), Arno Stark-Iron Man, freakin’ Stryfe, Thor (what’s he doing there?), and more. All of that equals a bunch of awesome and a whole ‘nother reason to pick up Uncanny Avengers #19.

That’s something you can do, by the way, on April 23rd when Uncanny Avengers #19 hits the racks from the team of Rick Remender and Daniel Acuña.

Jason's been knee deep in videogames since he was but a lad. Cutting his teeth on the pixely glory that was the Atari 2600, he's been hack'n'slashing and shoot'em'uping ever since. Mainly an FPS and action guy, Jason enjoys the occasional well crafted title from every genre.
@jason_tas
Previous Preorder Moebius on GOG and get a lengthy demo to tide you over till launch
Next Animation and AI play a big role in Techland’s Hellraid