Sakurai yet again posts a whole host of content for you to feast your eyes on. We’ve got Kid Icarus‘s Phosphora, a Smash Ball, and more. 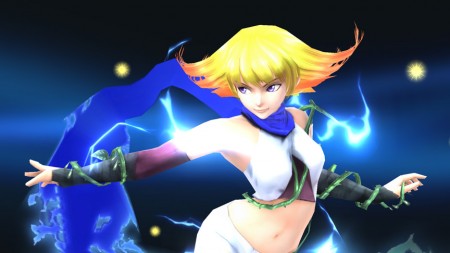 Phosphora has been confirmed as an assist trophy for Super Smash Bros. No details on how she works exactly, all that is known is that she will appear in the Wii U version of Smash. It is also unknown as to whether or not she’ll be available in the 3DS version. There’s also a close up of the Smash Ball in Pyrosphere, with Luigi and Kirby beside it. Another image of Rosalina is provided; she is seen peaceful lying down on a platform in the Animal Crossing stage. Some extensive exposure of the Super Mario 3D Land stage can be seen. Several parts of it are displayed, such as a mountainous region, a grassy area, and a section over the ocean with spiky pillars breaking through the platforms.

Finally there’s a pretty funny looking image of Diddy Kong and Bowser. In the picture, Diddy can be seen firing his peanut gun at Bowser. Apparently, the mechanics have changed, as the peanuts explode on impact. The gun is harder to wield, but packs more of a punch than in Super Smash Bros Brawl. That’s it for this week. Be on the lookout for more screenshots, as Sakurai releases them on a weekly basis.

Well, my name's Christopher Deleanides as you all know and I'm the Nintendo Editor here at BG. I've been playing video games since 1992, and I've been a Nintendo fan the entirety of those years. My love for video games as well as Nintendo hasn't changed, and probably never will. The only thing that comes close is politics, as I'm very deeply involved in both local and international issues.
Previous Microsoft cuts Xbox One price
Next SNES reimagining of Final Fantasy XIV