Steelseries enters the iOS 7 hardware competition with a fully-featured, console quality gamepad set to bring the living room experience to you iDevice. 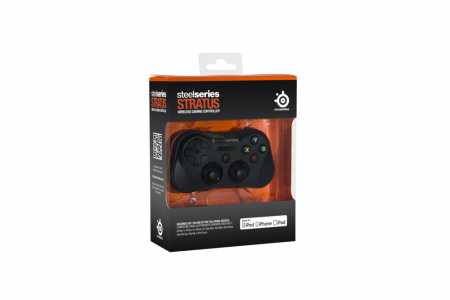 For some time now, the touchscreen has been something of a sticking point for traditional console (and even PC) gamers who play games on their mobile devices. Sure there are plenty of games that support the interface well and some that even make it a joy to play on. Those however, are few and far between when you’re talking about traditional gaming experiences.

By that, I mean the first-person shooters of the world, the side-scrolling action games that take pin-point accuracy, etc… The bottom line is that it can be a pain (even for the best made of these kinds of games) to play stuff like that on an iPad since the level of control that you might be used to just flat-out isn’t there.

With the dawn of the iOS 7 operating system though, all that’s a thing of the past. iOS 7 ushered un a new age of built-in native controller support for the iPad and iPhone line of Apple devices, something that gamers were pretty happy for at the time. I know quite a few actually who were more than happy to decree the handheld gaming console dead as zoo as these new ‘Apple’ control pads started hitting the market.

Their arrival has been somewhat slow though and only at the tail end of 2013 did we start to see stirrings at retail. Now here in 2014 another challenger has arrived in the Stratus. Steelseries’ pad brings something that no other currently available does too, that being that it works not just on the iPhone, but also on the iPad and iPad Mini.

The pad links up to the Apple device of your choice (yes, even the iPhone) with a simple Bluetooth connection that’s just as easy to set up as an external speaker or headset. Just search for the device and, once its recognized, pair it via the button on the rear of the controller and you’re done. I had zero connectivity issues and really didn’t even notice any lag in the games I tried the Stratus with.

Make no mistake here, this is the real deal when it comes to controllers. The Stratus has L1/L2 and R1/R2 buttons, four face buttons, twin analog sticks, a central pause/start button and a standard d-pad. Just about the only feature it lacks that you can find on any console controller these days are clickable thumbsticks (referred to as L3/R3 buttons). True, it would have been nice if Steelseries had added this feature, but it’s hardly a deal breaker when you consider everything that this pad does right.

All of the controls work beautifully and are spot-on when played with platformers like Sonic CD or FPS’ like Dead Trigger 2 and Call of Duty: Strike Team. I set my iPad Mini on the table in front of me and played as though my Stratus was hooked up to a console. Since I’ve been waiting for something like this since the dawn of gaming on the App Store, I was more than a little excited to try it out on everything I could and it did not disappoint. 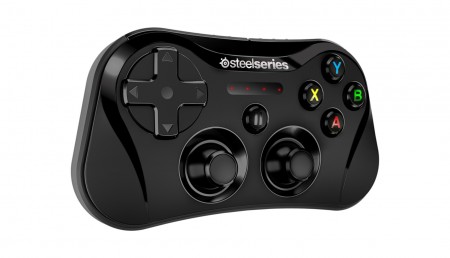 The Status even comes with a shield that clips over the face of the pad when not in use and then can clip to the back to add more size to the controller. That might not sound like much, but it’s actually a fantastic touch considering how small and potentially uncomfortable a controller like this could have been. It’s actually not all that bad even without the add-on, but with it it’s perfectly comfy for longer play sessions.

While we’re talking about the physical body of the unit, the Stratus seems pretty well put together too. Made of a fairly tough feeling plastic shell with a rubberized rim that runs around the whole piece, it seems like the Stratus is definitely safe to travel with. Steelseries also includes a zippered pouch to place the pad in when you are zipping about, which was a nice touch. It also charges with a standard Micro USB cable, which chances are, you already have attached to your ‘charging bay’ someplace (don’t worry, it includes one if you don’t already have a spare).

The Steelseries Stratus is just a great little pad, and there aren’t too many other ways I can put that. It’s a little on the small side, so if you’ve got massive mitts it might be a tad uncomfortable, but that’s about the only real complaint I have about it. Well, there is one other thing.

It’s unfortunate that right now there’s something of a dearth of games available on the App Store that make use of iOS 7’s native controller support. More are being added all the time (with some posting even while I was working on this review), but don’t expect to have all your touchscreen faves all of a sudden come packed with controller support.

I can’t for the life of me, think that that’s a situation that’s set to last for all that much longer though. The support that developers and fans have been asking for is there now and there are good pads like the Stratus on the shelves, so there’s real no excuse for new titles to ‘ship’ with controller capabilities built in. I have a laundry list of games that are available already that I’d like to see updated too (Doom please) and I firmly believe that before long the larger publishers ate the very least are going to start jumping on this with a little more verve.

With that in mind, there’s little reason not to recommend the Steelseries Stratus. It’s incredibly well put together and it’s even seen a price drop from $99 USD down to $79 USD. If you’re a gamer who’s in the market, there’s none better available for your iOS 7 gaming dollar that the Stratus.

Oh, and if you’re looking for list of compatible games (and remember, those are only on iOS 7), the hardware-maker has a handy-dandy little list that you can check out by clicking here.

Jason's been knee deep in videogames since he was but a lad. Cutting his teeth on the pixely glory that was the Atari 2600, he's been hack'n'slashing and shoot'em'uping ever since. Mainly an FPS and action guy, Jason enjoys the occasional well crafted title from every genre.
@jason_tas
Previous Winterworld returns this Summer from IDW
Next Bif Bang Pow! teams with ZICA for new Twilight Zone figures