Empire of the Dead #3 (Comics) Preview

The undead horde roams the streets of the Rotten Apple, while vampires stalk the night. Not too much room in there for regular people is there? 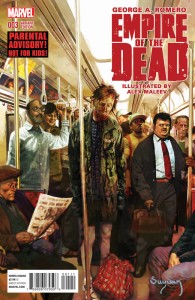 This March, the pulse-pounding horror epic continues in EMPIRE OF THE DEAD #3 – from the mind of Zombie Godfather George Romero and drawn by critically acclaimed artist Alex Maleev! Zombies roam the streets of a plague-ridden Manhattan by day. And Vampires feast on humans by night! Something is rotten in the big apple. Someone moves to strike against the mayor from the shadows. Who is the firecracker known as Dixie Peach? And as whispers of a full-scale zombie uprising stir – where does that leave the last remaining humans? Find out when GEORGE ROMERO’S EMPIRE OF THE DEAD #3 shambles its way into comic shops this March!

Much like the cover too, Empire of the Dead is easily one of the most original horror tales to be told in years. Originality isn’t something you normally associate with the ‘zombie’ genre either, but here we are with Romero pitting undead factions against one another in a battle for what used to be the greatest city in the world.

Even for a non-fan of this kind of stuff, that’s pretty neat and actually something that I’d want to read- not a usual occurrence for me. Empire of the Dead #3 from Romero and artist Alex Maleev (who’s doing a bang-up job on Empire by the way) shambles into comic shops on the 26th of this month.

Jason's been knee deep in videogames since he was but a lad. Cutting his teeth on the pixely glory that was the Atari 2600, he's been hack'n'slashing and shoot'em'uping ever since. Mainly an FPS and action guy, Jason enjoys the occasional well crafted title from every genre.
@jason_tas
Previous Standby for Titanfall, EA and Respawn’s juggernaut drops next week
Next Plants vs Zombies Pinball creeps up on Mac and PC tomorrow