The saws will cut those meeses to pieces.

The front page of the website for Ethan Meteor Hunter says “When Super Meat Boy meets Braid, you may die repeatedly and enjoy it!”.  Having spent a large amount of time with the game, which combines some tricky, timing based platforming with time manipulating puzzles, you can see where elements of those games influenced Ethan.  It’s certainly not as difficult as Super Meat Boy, but you will die quite frequently in some areas, and the time manipulating element mostly involves pausing rather than rewinding time, but Seaven Studios have certainly made an interesting game here.

Ethan is an anthropomorphic mouse whose house has been a neighbour.  Touching meteorites has given Ethan the power of telekenesis, allowing him to move objects and freeze time, and now he’s looking for more pieces of meteorite to increase his power and ultimately get revenge on his neighbour.

Ethan takes the form of a side scrolling puzzle platformer, where one-hit kills are the order of the day.  Your aim is to make it through the level, collecting bits of meteorite and trying to avoid being killed, and there are many ways for you to die.  You can be crushed, electrocuted, burned to a crisp, sliced to ribbons, dissolved in acid and many other things.  And you will find that, in some levels, you often die.  Luckily, there are quite a few checkpoints scattered around the levels at strategic points, which help somewhat. 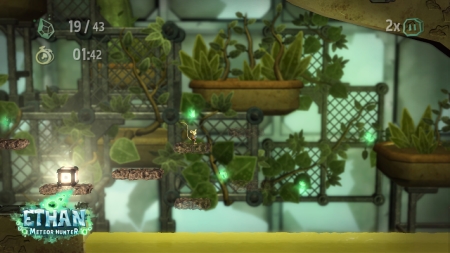 As you progress, you will find pause tokens at various points.  Each token allows you to pause time once and move objects around a certain, outlined area of the level.  Each pause token will allow you to move as many moveable items around the designated area as much as you like until you unpause, at which point the token is used up.  If you make a mistake, you can revert to the previous checkpoint and start again by holding down a button.  These puzzle plaforming levels are broken up with the occasional pogo stick level, where you need to hop to the top without dying, and spaceship levels, where you have to shoot your way through.  The pogo levels are tricky but fun, and the shooting levels are fun enough, even if they do feel a little out of place.

The difficulty curve in the game is quite odd at times.  You might find yourself dying dozens of times in one level, only to pass through the next two or three levels without a problem.  Some of the puzzles break the pacing of the game somewhat as well, with you suddenly pausing the game to shift things around in order to avoid certain death.

The only requirement to get to the next level is to reach the goal, but you can go back and replay levels to collect all the meteor fragments and try and beat the ‘par’ times for the levels, if you are a completionist.  There’s also mounds of cheese hidden in certain levels to find.  You probably won’t hit all your objectives in a single run, especially with the par times, but you can do things in parts.  There are achievements to try and unlock as well, some for doing well and some for doing incredible badly, essentially mocking you. 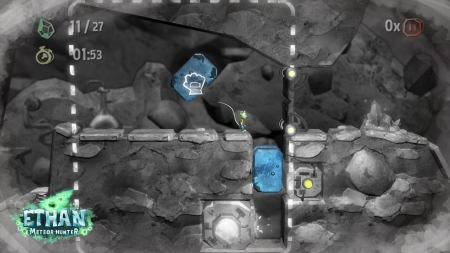 The game looks quite pretty, with a variety of materials, environments and hazards to look at.  The effects are good.  Although Ethan himself looks a little plain and uninteresting compared to the places he inhabits, and his animation seems somewhat animatronic in nature, which is again in contrast to what’s around him.

The music is catchy and can get in your head, although there isn’t much variety in it, and thus it does get repetitive.  When you’ve been in a level for a long time, you will very much notice it.  The music is good, though, and fits in well with the pace of the game.

FINAL THOUGHTS
Ethan Meteor Hunter is an enjoyable addition to the puzzle platformer genre.  The levels are challenging without being frustrating, although the difficulty curve seems to have odd blips in it.  It’s never unfair, though, and if you fail it’s because you did something wrong, and not because the game tried to screw you over.  The pacing is a bit odd at times as well, and I would have liked to have seen more variety with the soundtrack, but overall, it’s a fun game that will keep you interested until the end.

Mike is Brutal Gamer's Indie Editor. He has been playing video games since the early 90s and is fond of racing games, puzzlers and MMOs. Typing /played while in WoW makes him cry, but not enough to stop him playing some more.
@Ognawk
Previous The Punisher #3 (Comics) Preview
Next Toy Fair ’14: NECA rocks the show with Aliens, Predator, Batman, BioShock and more