The Bridge is a unique game for the Xbox 360 and a good alternative to the much-loved puzzle-platformer Braid. 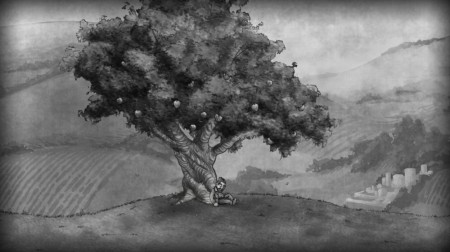 If you’re tired of hearing about Call-of-Duty-this and Battlefield-that, and are looking for something different and unique to play on your Xbox 360, The Bridge, a puzzle-platforming along the vein of Braid, might be just what you’re looking for.

With a visual style that mixes the illustrative style of artist M.C. Escher with other haunting, sepia-toned art of the late 1800s and early 1900s, The Bridge isn’t exactly the type of game you’d expect to be playing on an Xbox 360. It’s because of this that it really stands out visually.

But there’s more to the Bridge than just its looks. 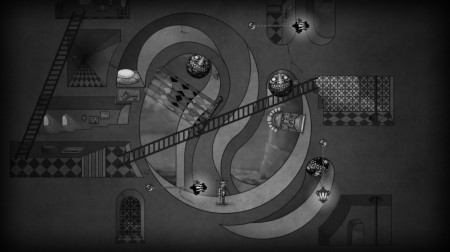 The Bridge has four chapters, consisting of 5 levels each. The goal of each level is to get the protagonist to the exit. You do so by changing gravity by rotation the game level clockwise and counter-clockwise.

In earlier levels the exit is easily accessible, but in later levels acquiring the key to your freedom is a bit more difficult.

Levels are solved by thinking outside the box. Just like with an M.C. Esher painting, it’s all in the perspective. Especially when you manipulate the perspective to your benefit. Ceilings become floors, and floors become ceilings.

Puzzles begin easy enough and, as always, increase in difficulty and complexity as the chapters and levels increase. There are more traps and obstacles that will also be affected by the pull of gravity and the rotation of the world.

While there is no health meter or life counter to worry about, you can die in The Bridge. Again, akin to Braid, if you do meet your untimely demise, you can rewind time as far back, or as little, as you need to right your wrongs.

Along the way there are many things that can extinguish your life, most notably gravity (falling out of the level), becoming trapped in gravity-sucking black hole-like vortexes, and getting squished by The Menace (or Menaces (Menaci?)). The Menace is a large boulder with a rather unpleasant-looking face that is extremely reminiscent the Moon from Majora’s Mask. (See the screenshot above and tell me the developers weren’t influenced by that Zelda title.)

The Bridge is a budget-priced Xbox Live Arcade title, currently priced at $9.99 — and thankfully so. As unique as it is, both visually and gameplay-wise, it’s a bit on the shorter end. I was one level shy of completing the game’s 20 levels, before I was ready to take a break. Of course, your mileage may vary wildly depending on how capable of a puzzle-solver you feel that you are. To help lengthen the game, once you finish the last level, you can then go through and test your brain’s might against mirrored versions of each of the four chapters.

There is no doubt that The Bridge stands both in terms of looks and how it plays, when compared to other Xbox 360 games. That might be, in part, thanks to the game’s indie roots, having been released first for the PC in early 2013 (about a year ago, actually), and quite a bit later for the Xbox 360.

Levels are solved by thinking outside of the box, and manipulating gravity by rotating the game’s world to get the protagonist to the exit.

While it’s not quite as engaging as Braid, it’s still a very enjoyable puzzle game. If you fancy yourself a competent puzzle-solver, you can probably complete The Bridge in about 2 hours. There are mirrored levels to continue the challenge, but might be more attractive to Xbox Achievement hunters.

The Bridge is a fresh and unique game, and for that I recommend the game for puzzle fans. If you’re on the fence, at least download the trial and give it a shot.

Troy is the Features Editor at Brutal Gamer. When he's not writing about or playing video games, he's enjoying life with his wife and children. He also loves coffee. And lots of it.
Previous Borderlands 2 official on PS Vita?
Next All-New X-Men #23 (Comics) Preview