The Shi’ar have gotten their hands on Jean Grey and fully intend to make her pay for her crimes as Dark Phoenix- even though this particular Jean hasn’t even committed them… yet. 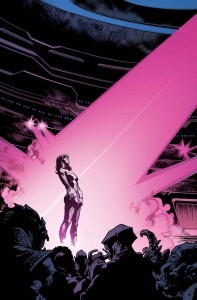 Jean Grey must pay for her crimes – even the ones she hasn’t committed yet! Marvel is pleased to present your first look at ALL-NEW X-MEN #23, the next blockbuster chapter of “The Trial of Jean Grey”! From the critically acclaimed creative team of Brian Michael Bendis & Stuart Immonen – the alien Shi’ar Empire has abducted Jean Grey, placing her on trial for the cataclysmic crimes of her future self. On the edge of deep space, the young mutant and original host of the Phoenix Force pleads for her life amidst alien races who would see her destroyed!

As her fellow X-Men and new allies the Guardians of the Galaxy race across the stars to her aid, will they arrive in time? Or will it be too late? Plus, an ending so shocking you’ll have to see it to believe it! Don’t miss the issue everyone will be talking about when ALL-NEW X-MEN #23 blasts into comic shops this February!

Ah the dangers of time travel. Sure, you can go back in time and grab the core X-Men, bring them to the present and hope that they’ll be able to help crumbling relations in the current team and with the world at large, but what happens when the past yet to be (for them anyway) catches up?

It was only a matter of time before the re-emergence of Jean Grey, the woman who played host to the destructive Phoenix Force, started to cause ripples in the Marvel U and now we’re here. Longtime allies of the X-Men, the Shi’ar aren’t too happy to see Ms. Grey and they’re taking cosmic law into their own hands by putting a girl who hasn’t even committed a crime yet on trial. Of course, they’re going to have to deal with the rest of the team now as well as a monkey wrench that they might not be all that prepared for in the Guardians of the Galaxy.

If you’re a fan of X-lore and a longtime follower of the team and the comics sub-universe that the mutant super-team has created, this is one arc you don’t want to be missing out on. Marvel is also promising a “shocking” ending to this issue; which in my mind could mean only one of two things- either Jean dies (again) or the Phoenix busts loose (again). Either one would be Universe shattering, especially since big red made an appearance not all that long ago. Of course, it could be neither of those things either and Marvel could really toss fans a curveball.

Either way, don’t miss this one. The Trial of Jean Grey heats up in All-New X-Men #23 on February 12th from the team of Brian Michael Bendis and Stuart Immonen- and of course, Marvel Comics.

Jason's been knee deep in videogames since he was but a lad. Cutting his teeth on the pixely glory that was the Atari 2600, he's been hack'n'slashing and shoot'em'uping ever since. Mainly an FPS and action guy, Jason enjoys the occasional well crafted title from every genre.
@jason_tas
Previous The Bridge (XBLA) Review
Next Underground Pixel is full steam ahead for 2014!