Can you try someone for a crime they haven’t even thought of committing? That’s the question that hangs in the balance As the X-Men take on the Guardians of the Galaxy for the life of Jean Grey. 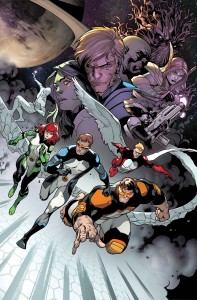 Jean Grey must pay for her crimes – and galactic forces from across the stars are out to extinguish the threat of the Dark Phoenix before Jean Grey even meets the Phoenix force! The All-New X-Men must fight to save one of their own alongside the most unlikely allies – THE GUARDIANS OF THE GALAXY!

Should she be stopped before it happens again? Lines will be drawn and sides chosen as the epic Trial of Jean Grey crossover begins in ALL-NEW X-MEN 22.NOW this January and continues in GUARDIANS OF THE GALAXY 11.NOW one week later!

There’s just something that magic about seeing the original X-Men in action again and in continuity. After all that’s happened in the X-universe, especially in the last few years, watching the starting five battle the forces of evil again as they were in the 60s version of the team is flat-out awesome.

I’m not nearly as big of a fan of the Guardians of the Galaxy however. Even with that though, I have to admit that it’s pretty slick to pit the Marvel Cinematic Universe’s next big thing against the X-Men in a Dark Phoenix-tinged tale. Even though this version of Jean Grey never met or interacted with the rampaging cosmic force known as the Phoenix, can she be held and tried simply because she is who she is. It’s actually kind of an interesting question on the whole and one that holds all kinds of coolness for X-fans.

Whichever way to lean, you’re probably not going to want to miss out on All-New X-Men #22 when it hits that stands on January 22nd from the team of Brian Michael Bendis and aritst Stuart Immonen. Oh, and be on the lookout for variant covers for the book from Chris Samnee and the great Dale Keown.

Tags All New X-Men Guardians of the Galaxy Jean Grey

Jason's been knee deep in videogames since he was but a lad. Cutting his teeth on the pixely glory that was the Atari 2600, he's been hack'n'slashing and shoot'em'uping ever since. Mainly an FPS and action guy, Jason enjoys the occasional well crafted title from every genre.
@jason_tas
Previous Castlestorm sieging the Wii U for the Holidays
Next By Kingdom Come, Deliverance is a realistic medieval action/RPG