The boys take on the Sect Civil War in an all-out action epic… and a three-thousand year binge. 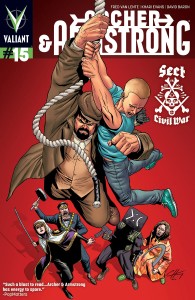 In this particular issue, the man now calling himself Dark Archer (NOTE TONAL SHIFT) must find his former partner Armstrong so they can reunite to stop the aforementioned Sect Civil War. Only, that is, if Armstrong and his brother, Ivar the Timewalker, can finish their 3,000 year binge in the time stream and sober up in time to change the Valiant Universe forever!

Aside from Quantum and Woody, Archer & Armstrong is probably the most purely fun book in the Valiant stable. Even in the face of world-dominating societies, vicious cults and wacked-out supervillains, A&A still maintain a proper level of hilarity- and drunkenness, can’t forget the drunkenness.

Sect Civil War is probably the biggest storyline to hit the book since it’s (re)debut last year, and as much fun as the twosome are, it’s a no joke kind of tale with some far-reaching consequences that are bound to be felt in the Valiant U for a good long time yet. Much like a really, really bad hangover. Not that Armstrong would know anything about those.

Jason's been knee deep in videogames since he was but a lad. Cutting his teeth on the pixely glory that was the Atari 2600, he's been hack'n'slashing and shoot'em'uping ever since. Mainly an FPS and action guy, Jason enjoys the occasional well crafted title from every genre.
@jason_tas
Previous Humble Bundle Launches The Humble Store
Next Call of Duty: Ghosts companion App released