A world on the brink. 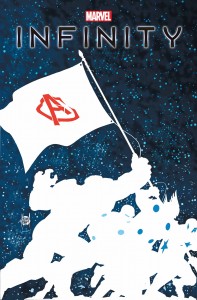 It’s all come down to this! Marvel is proud to present your first look at Infinity #6 – the final epic chapter in the blockbuster comic event of the year, brought to you by the star studded creative team of Jonathan Hickman and Jim Cheung! Earth isn’t the only “Avengers World” anymore! Races from all across the galaxy now stand united in an Avengers Universe! Only with their combined might can Earth’s Mightiest Heroes make their final stand against the destructive alien race known as the Builders.

Now, as the Avengers’ astronomic altercation to save an entire universe draws to its epic conclusion, the greatest threat has arrived at their own front door! Earth has been laid siege by Thanos, the galaxy’s most ruthless marauder. The Avengers have returned home to their foremost fear – a broken and destroyed planet. Attilan lays in ruins as Thanos makes his final play to capture his wayward son Thane. But what will remain of Earth once he catches his prey?

Thanos is without a doubt one of Marvel’s very best villains. The Mad Titan has no remorse for what he does, kills without a second thought and cares only about his next conquest. In the past, massive crossovers like this have always seen Thanos take on the Marvel U’s heroes head-on, so it was an interesting idea to match him up with the new threat of the Builders in Infinity and have him take advantage of an Earth relatively undefended.

Of course, now that the Avengers are back, and have an entire universe of heroes to help them, big T just might have bitten off more than he can chew. The final issue of Infinity hits stands on November 20th from the creative team of Jonathan Hickman, Jim Cheung (who’s been doing a bang-up job) and Adam Kubert. You’ll also find a bunch of variants on the racks with covers from the likes of Skottie Young, Jerome Opeña, In-Hyuk Lee, and Terry Dodson. If you’ve been enjoying Infinity, there’s a lot to like right there.

Jason's been knee deep in videogames since he was but a lad. Cutting his teeth on the pixely glory that was the Atari 2600, he's been hack'n'slashing and shoot'em'uping ever since. Mainly an FPS and action guy, Jason enjoys the occasional well crafted title from every genre.
@jason_tas
Previous Xbox One buggy? Microsoft says not to worry
Next PES 2014 online functions restored, ready to kick it on Xbox 360