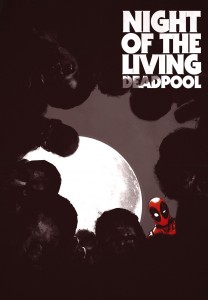 After waking up from a pretty epic food coma, our hero finds himself in the middle of the zombie apocalypse! And Deadpool’s not the only one with a full belly – there’s plenty of brainless eating machines just looking for their next good meal! Nothing says “tasty meal” like a mutant who can re-grow his flesh!

Oh Wade, what will you get into next?

The character has definitely taken the Marvel fanbase by storm and shot right to the top of a list that includes some of the greatest characters in comics history. Originally from the pages of X-Force and created by artist Rob Liefeld, Deadpool has really caught on over the last decade- which is putting it mildly.

Now with a feature film waiting in the wings (maybe), a very successful monthly and numerous cameo appearances in tons of Marvel animated movies, books and games (including his own), ‘Pool seems to have a stranglehold on rampant popularity.

Adding fuel to that fire is the trilogy of books that I mentioned above by Cullen Bunn- all of which are screwball comedies drenched in a mixture of action and insanity. Night of the Living Deadpool looks to be right there with them too.

Penciled in black & white (‘cept for the main merc), Night of the Living Deadpool is already looking plenty striking in the short preview that Marvel sent our way. Have a peek below, watch waste a ton of rotters, and then prepare to wait… Because Night of the Living Deadpool#1 doesn’t hit stands January from Marvel Comics and the creative team of Bunn, Ramon Rosnas and Jay Shaw (who did that slammin’ cover).

Jason's been knee deep in videogames since he was but a lad. Cutting his teeth on the pixely glory that was the Atari 2600, he's been hack'n'slashing and shoot'em'uping ever since. Mainly an FPS and action guy, Jason enjoys the occasional well crafted title from every genre.
@jason_tas
Previous Shadow Warrior (PC) Review
Next Atlus-o-Weenie is neigh! Break out the cosplay