Spartacus returns to Starz… sort of

The channel will be re-airing the full run of the epic show from the opening scenes to the closing moments. 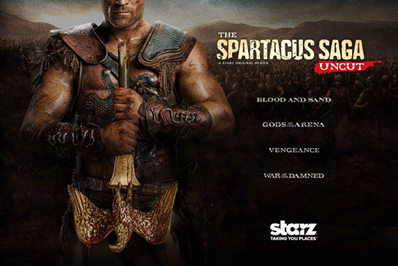 The House of Batiatus, a gladiator training camp, is on the rise, basking in the glow of its champion Gannicus. A young Batiatus, with his loyal wife Lucretia by his side, is ready to overthrow his father and betray anyone to keep his gladiators in demand. But when Batiatus falls on hard times, it will take a gladiator greater than current champion Crixus to turn his fortunes around. When a Thracian slave named Spartacus arrives, Batiatus senses greatness. Under the watchful eye of gladiator trainer Doctore, Spartacus rises through the ranks to become the new champion. However, when Spartacus discovers that his wife Sura has been killed, he plots to avenge her death and free every slave; a bloody escape ensues. Gaius Claudius Glaber, the Roman responsible for bringing Spartacus and his wife into slavery, sends troops to crush the slave army. But Spartacus, with a rebellion swelling to thousands of freed slaves, becomes a force mightier than Rome had ever imagined. The Roman Senate turns to Marcus Crassus, a wealthy, strategic politician, for aid. With a young Julius Caesar as an ally, Crassus must crush the rebellion. And one final, bloody battle will be unleashed; a battle unlike anything ever seen before in the history of the Republic.

Does Starz even do ‘reruns’? I can’t think of a time when the channel has rerun anything other than movies, but here we are with Spartacus heading back for more- and it’s all thanks to the fans. The channel says that fans of the show have been all over social media outlets like Twitter and Facebook talking about the program even now after it’s been off the air for months.

Bottom line- folks liked the show about a slave leading his fellow gladiators to glory in ancient Rome a lot. For their part, Starz is more than happy to give the fans what they’ve been asking for and bring the show’s full run back to TV. Starting with Blood and Sand and beginning on October 26th, Starz will run the full first, second and third seasons of Spartacus, uncut and unedited.

What’s really cool is that the episodes are going to run as though they’re new, with a few dates as exceptions. By that I mean they’ll be weekly events instead of a mixed up crap shoot or a marathon.

Here’s the full schedule that’ll take you through New Years:

Jason's been knee deep in videogames since he was but a lad. Cutting his teeth on the pixely glory that was the Atari 2600, he's been hack'n'slashing and shoot'em'uping ever since. Mainly an FPS and action guy, Jason enjoys the occasional well crafted title from every genre.
@jason_tas
Previous Marvel announces Agents of S.H.I.E.L.D. variant covers
Next Zelda concert series teams with Extra Life