You better believe DST will have some goodies and panel presentations on hand for the east coast’s biggest Con. 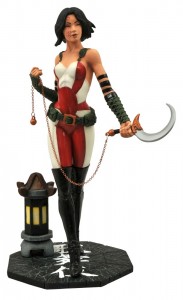 Diamond Select Toys will be offering their usual build-a-Minimate station at the show. All you need do is pick up $20 worth of ‘mates at the booth, it doesn’t matter which ones, and you’ll get a free turn at the counter to put your own character together. The toy maker promises that “Ten years of parts are just waiting for you to create your own one-of-a-kind Minimate to take home!” And just in case that’s not enough for you, DST will also be dumping brand new parts into the vat each and every day of the show. Oh, an if you need some stands for your little guys, DST will have those available in three different bags for $4.00 USD each.

Aside from that, the Apple Con show exclusive is an unmasked version of the company’s Kabuki statue from their Femme Fatales line of 9″ PVC pieces. Kabuki of course, comes from David Mack’s comic of the same name and shows off her facial scars in this ‘unmasked’ variant of the standard statue. Kabuki Unmasked is limited to 100 pieces and will cost you $45.00 USD at the Diamond booth.

Want some panels? Of course you do:

Make sure you stop by for both panels and at the Diamond booth (which is #2036 on the show floor) for all the action. NYCC runs from October 10th through the 13th at New York City’s Javits Center.

Jason's been knee deep in videogames since he was but a lad. Cutting his teeth on the pixely glory that was the Atari 2600, he's been hack'n'slashing and shoot'em'uping ever since. Mainly an FPS and action guy, Jason enjoys the occasional well crafted title from every genre.
@jason_tas
Previous Video Games: The Ever-Changing Landscape
Next Developer Pack available now for Metro: Last Light