Entry is not guaranteed.  GLORY TO ARSTOTSZKA! 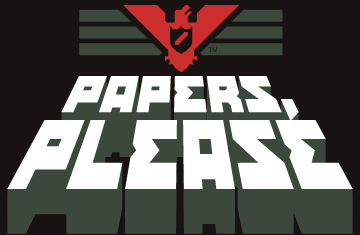 Morality in video games is an interesting thing.  Several games involve so-called ‘moral choices’ these days which, on the whole, involve choosing to say or do a good thing or a bad thing.  However, you never tend to agonise over these decisions, it’s just a case of “OK, I’ll pick that one.”  Papers, Please, a puzzle game developed by Lucas Pope, is a bleak representation of border control, which often has you questioning whether you can justify ‘just doing your job’ over trying to help people who are desperately in need, including your own family.

The main story mode of the game takes place over the course of a month.  It’s the 1980s and you’re a citizen of the nation of Arstotzka.  In the monthly ‘Labour Lottery’, you are chosen to work a job as a border control officer.  You have to assess the long, snaking line of people trying to get into Arstotzka from neighbouring regions and decide whether or not you should let them into the country.

Each day, you have to assess the line at the border and check the papers of anyone entering the country.  You need to make sure that all the details given to you match up.  In early levels, it’s simply a case of matching passport numbers, names and genders between documents.  However, things soon get more complicated.  Terrorist attacks from a neighbouring nation can result in you having to instigate “random” searches on anyone from said nation attempting to get into Arstotzka.  You will also get new documents, such as having to check work permits if someone is coming in to work.  You’ll also have to listen to them explain why they want to cross the border and make sure what they say checks out with their documents.

As you get further into the game and have more documents to shuffle around your desk, you will invariably make mistakes, letting people in who have discrepancies in their information or turning people away who are legitimate.  The first couple of times this happens each day you will be given a simple warning, which will be sent to you in the form of a dot matrix printout on your desk.  However, make more mistakes and you will be financially penalised, and the money you earn from your job is an absolute pittance and depends on how many requests for entry you process each day.

The matter of money is what drives the moral choices in the game.  At the end of the day, you have to pay for food and heat for your family, but they will also get sick sometimes or you will need to buy birthday presents.  You will not always earn enough to cover everything either, so you will have to make some difficult choices.  This feeds back into your actual job when you have certain situations crop up.  For example, a husband and wife will want to enter the country after one another.  The husband has fully legitimate documents, but the wife won’t have all the necessary paperwork.  You have to decide whether you’re going to turn her away and seperate her from her husband, or let her through but incur a penalty in the process.  So you’ll have to balance carrying out your job to the letter with trying to help genuine people out at personal cost to you and your family.

The people who darken your borders have character too.  They range from worried, to friendly and downright rude.  There are some light moments, though, provided by a man who keeps trying to enter the country with laughably bad fake documents, who claims he’s just trying to make sure you’re doing your job correctly.  Things like this make sure that Papers, Please isn’t completely bleak in tone.

The complications of your job are thankfully helped by a simple UI, where you can drag documents up to your desk as and when you need them.  There are buttons that appear on the screen for things such as searching people and trying to check for discrepancies.  Getting further into the game allows you to buy booth upgrades, if you can afford them, which allow you to bring up certain things by simply tapping a button rather than having to drag them or click them with the mouse.  This is a bleak looking game as well, with a lot of grey and drab 16-bit looking colours set to an ominous Eastern style soundtrack and the garbled tannoy announcements as you call the next person to the desk.  It adds to the overall atmosphere of the game.

Once the story mode is done, you can unlock three new modes, Timed, Perfection and Endurance.  You can try them out if you really love the puzzle aspect of the game, but without the story, it’s not as absorbing.

FINAL THOUGHTS
Papers, Please is an interesting and thought provoking game.  You might get the odd chuckle along the way but it’s not really possible to describe this game as ‘fun’.  It is, however, an engrossing and brilliantly written experience that will have you questioning what you do almost every step of the way.  Not everyone will like this game, but if you’re looking for something different from the ‘norm’, then this might just be what you’re after.

Mike is Brutal Gamer's Indie Editor. He has been playing video games since the early 90s and is fond of racing games, puzzlers and MMOs. Typing /played while in WoW makes him cry, but not enough to stop him playing some more.
@Ognawk
Previous Preorder promo announced for Amnesia: A Machine for Pigs
Next Saints Row IV (Xbox 360) Review