Things explode in a big way in Most Wanted Games tribute to the action flicks of yore.

Those big budget, super-violent ‘R’ rated action movies from years ago are pretty scarce at this point. I think I can count on one hand the amount of big sci-fi/action films that have come out in the last ten years or so that were just plain fun. There used to be tons of them though.

I remember well the days of over the top violence and exploding everything when the likes of Schwarzenegger, Stallone, Van Damme and others graced the silver screen every summer. Some of my favorite movies of all time hail from that ’80s (and even ’90s to some degree) era of the summer blockbuster. And it’s in that same vein that Most Wanted Games’ Thunder Wolves takes its inspiration. 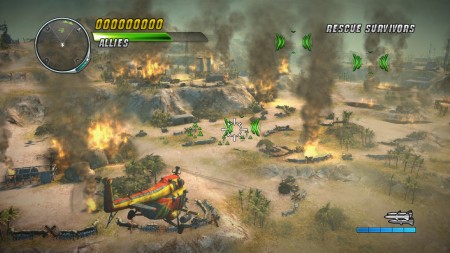 This is a game that’s mainly about shooting at whatever happens to be in front of you and making it go ‘boom’. And that’s a very good thing by the way. Although Thunder Wolves may just be about pure action at its core, it actually does a great job of mixing that non-stop blasting up and keeping the game fresh all the way through.

Focused on a paramilitary organization of the same name, Thunder Wolves moves from location to location and jumps around a bit from year to year in the 1980’s and early ’90s to tell its tale. The narrative, which is not why you play this game by the way, is pretty simple stuff and sets you and the Wolves to task against armies of baddies up to no good.

You’ll go from piloting your chopper and shooting guns and rockets to ‘on rails’ sections where your guns take point and you lay into enemy forces up close and personal. Also in the mix are sniper missions and levels where you take control of ground vehicles and plow through the battlefield. I honestly would have liked to have seen more of those as they’re really quite fun and provide a nice alternate to the helicopter action. Not that the choppers aren’t fun to use. 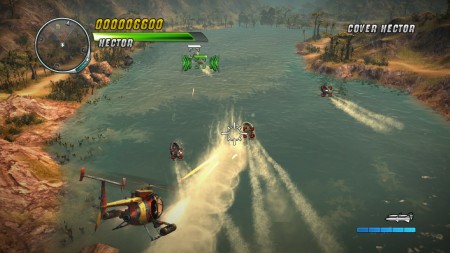 There really hasn’t been a good helicopter shooter in years and Thunder Wolves does it right with plenty to shoot at and some excellent controls to do it with. You can fire guns and rockets (several types) and can also pop flares to distract heat-seekers, which make for some truly frantic moments- especially when you’re taking a pounding and oh so close to crashing and burning.

The graphics in Thunder Wolves run the spectrum from solid to pretty, but are never really what I’d call great or bad. The game has a kind of… toy or model aesthetic. At times, and especially when ground forces are involved in a close up, the game reminded me of playing with Micro Machines when I was a kid. Everything just looked small and extremely unrealistic. I know that probably sounds like a complaint, but I can’t say I found the visual oddity unappealing. Actually, I rather liked it. Maybe it was because of the army men-type look that I liked it so much, but whatever it was I definitely enjoyed the visual presentation. 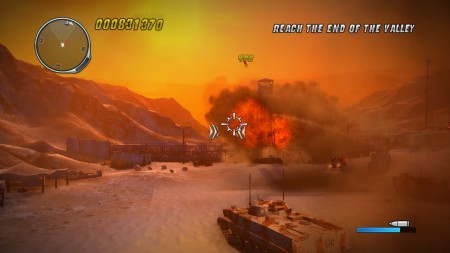 The audio is good too with plenty of corny lines being thrown back and forth between command and the pilot and rookie co-pilot. Bonus- the voice acting is pretty great stuff.

I also thought the audio effects were solid if unspectacular, with some big explosions and all the appropriate gunfire and missile launch sounds present and accounted for. Oh, and the alert that blares every time there’s a target lock by an enemy is nice and tense. Add that to the missile locks and you really get some pretty awesome moments.

Thunder Wolves is non-stop action from the moment you fire it up.

The game is all about blasting enemies and staying alive while you do it and it’s just tons of fun. It’s a little too short and a greater variety of vehicles would have been nice, but I can’t really complain too much about anything here. I honestly think I’m the exact target audience for Thunder Wolves and I had a great time with it.

It’s not exactly groundbreaking stuff, but if you like over the top action movies and helicopters, you’ll like this. Now, how about a sequel?

Jason's been knee deep in videogames since he was but a lad. Cutting his teeth on the pixely glory that was the Atari 2600, he's been hack'n'slashing and shoot'em'uping ever since. Mainly an FPS and action guy, Jason enjoys the occasional well crafted title from every genre.
@jason_tas
Previous SDCC: Koto unveils exclusive Harley Quinn unmasked
Next SDCC: Marvel unveils list of show exclusives