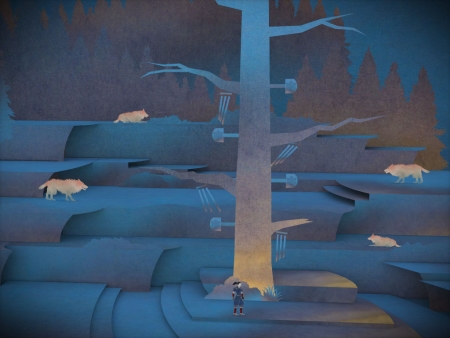 I’m sure a lot of us either had or saw pop-up books when we were kids.  In my opinion, one of the most visually interesting games at Rezzed was Tengami, an adventure game being developed by Nyamyam.

Tengami has a papercraft visual style, and uses pop-up book style mechanics that make the world unfold in front of you, quite literally.  The blend of 2D and 3D visuals really makes things stand out.  The puzzles contained within make use of the touch screen controls, as you pull a tab to make some stairs fold out.  Another puzzle involves a group of wolves and some wind chimes near to them.  You pull the nearby tabs to activate the wind chimes, which will make the wolves either howl or growl. The idea is to ring the chimes in the right order to make the wolves all howl.  They then go to sleep which allows you to proceed to the next area.

Tengami has soothing background sound which really compliments the beautiful design.  This is the sort of thing you can relax with and just enjoy the magic.  It’s simple and just makes you want to delve further into the world to see what other wonders there are to behold.  The time I spent with the game felt far too brief and left me wanting more, so I’m really looking forward to the release of the game.

Tengami is out sometime this Summer for iOS, with PC, Mac and Wii U versions of the game planned in the future.  You can find out more at the Tengami website.

Mike is Brutal Gamer's Indie Editor. He has been playing video games since the early 90s and is fond of racing games, puzzlers and MMOs. Typing /played while in WoW makes him cry, but not enough to stop him playing some more.
@Ognawk
Previous Fifth Painkiller DLC arrives with Heavens Above
Next SDCC: DST decloaks its Bird of Prey 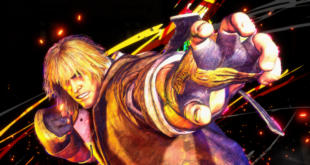