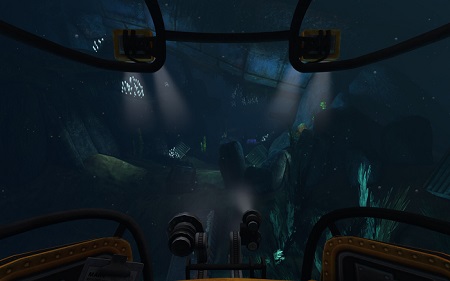 Over in Rezzed’s Leftfield Collection, there was a chance to try out the Oculus Rift virtual reality headset, which is currently in the hands of developers and set to be released to consumers sometime in the future.

One of the games on display was underwater exploration game Undercurrent, being developed by Hammer Head Studios.  Undercurrent sees you in a craft under the sea, exploring the environment by simply moving around and jumping.  There are a couple of paths you can take in some areas, basically consisting of a low and high level, but they both end at the same point.  There’s plenty to look at as well, with sharks swimming around, giant containers and rock formations and wrecked ships.  It’s all very pretty, even though the field of vision is a little blurry compared to looking at it on a standard screen.

There are two options available for turning your craft in the game.  Moving your head around will allow you to turn while moving forward with the left analogue stick on the controller.  If you click down the right analogue stick, the craft locks and you turn using the stick, but can still look around while turning your head.  It’s extremely immersive and natural, and the tracking is extremely accurate, the change in the field of vision feeling just right as you turn your head.

The actual hardware itself looks a little cumbersome perhaps, but it is actually very lightweight and comfortable, with plenty of padding to protect your face.  As you might expect, it can cause motion sickness.  I felt OK until just a few seconds before I got to the end of the short demo, but one of the developers did state that over time, you do build up a tolerance towards it, which is good.

Overall, while the time spent with the Oculus Rift was short, it’s a neat piece of kit that really does work, and Undercurrent is a perfect game to demonstrate how the virtual reality space works.  Hopefully, we’ll get another chance to check it out in the future.

Mike is Brutal Gamer's Indie Editor. He has been playing video games since the early 90s and is fond of racing games, puzzlers and MMOs. Typing /played while in WoW makes him cry, but not enough to stop him playing some more.
@Ognawk
Previous Rezzed Hands-On: Redshirt
Next Zelda Tribute Event