The Marvel MMO has arrived with its hack and slash on.

DC Universe Online has been out for a while now, originally as a subscription MMO and then it went free-to-play.  Marvel Heroes has arrived from Gazillion and is an entirely free-to-play MMO, which, in a different vein to DC, combines elements of Diablo style action RPGs into an MMO.  To anyone who enjoys Diablo and MMOs, that sounds great on paper, but it somehow manages to be frantic and yet somehow not greatly interesting.

To start with, you pick from five Marvel superheroes and heroines, each catering to a different type of play.  You have melee damage (Daredevil), ranged damage (Hawkeye), ranged caster (Scarlet Witch), ranged controller (Storm) and tank (Thing).  Other characters can be unlocked from random drops as you play the game, or paid for in the cash store.  However, the characters are expensive and aren’t really significantly different from the heroes you get for free.

The story of the game is told in the form of graphic novel style cut scenes, with images and voice overs telling the story.  The story is mainly concerned with the Avengers and the X-Men, so you may feel a bit left out of it if you’re playing as a character who isn’t in either group.  The actual missions and briefings are done in text format, with just basic sound bites from the characters acknowledging that you’re hearing from them. 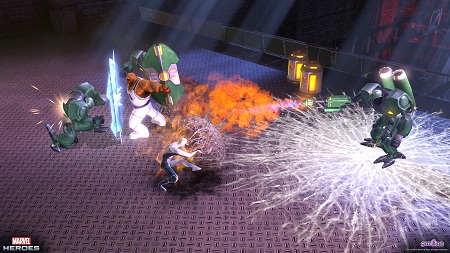 The combat is pretty simplistic, with left clicking for basic attacks, and right clicking and pressing certain keys activating special abilities.  As you level up, you get skill points to put in new abilities to add to your arsenal.  There isn’t much variety in the way of actual combat, though.  You pretty much just left click enemies to kill them.  You can do OK without using the special abilties, really.  Also, while enemies look different, aside from the bosses, they’re all pretty similar fights, and get repetitive quite quickly.

As you enter a main hub area, you’ll find yourself with dozens of heroes all flying around the place, killing the enemies.  Event quests start, and as other players take enemies down and complete the quests, you’ll find yourself gaining experience and completing quests that you didn’t actually do anything for, which is a little peculiar.  Each of these areas also have instances with quests in that you will be automatically assigned into a group for, unless you choose to solo them by turning auto grouping off in the options.  The enemies scale depending on whether you’re in a group or not, but they pretty much take on the same pattern of fighting enemies, beating a boss character and leaving.

There’s plenty of drops as you defeat enemies and the majority of the drops will be relavent to your character, although you’ll be mostly trying to increase your defence until you get some higher quality gear with additional stats.  Any gear you don’t want you can either sell or donate to vendors to increase the quality of the gear they’re selling.  Trouble is, there isn’t much to choose from at the vendors, so you won’t be buying much from them, aside from health kits. 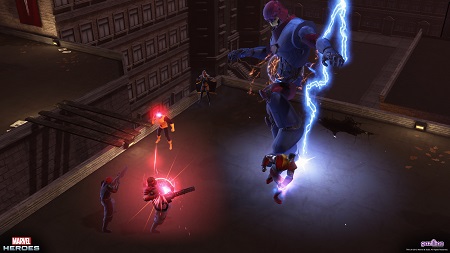 Aside from new characters to play as, the in game store also contains things like new costumes, pets and potions which increase your experience gains for a set period of time.  But you’re never made to feel like you need to spend money in the game, which is good.  Any new characters you buy will start from the beginning of the game when you play them.  As the story and the areas are the same each time, there’s no real incentive to play through the game again unless you really like the game and story.

Once you’re done with the story, there are three daily mission terminals to have a go at, starting with the green terminal which sees you going through and beating bosses you’ve killed previously with a random enhancement.  Playing through these unlocks the second terminal with harder missions.  There’s also a third terminal which has even better loot, but you need to get a Cosmic Key to unlock this terminal, which can drop sometimes from the first terminal missions.  However, there is no guarantee you’ll get the drop.  You can also buy them from the shop but there are 30 missions in all and you require a key each day to do them.  So if you really want to do those missions, it could potentially get expensive for you.

FINAL THOUGHTS
Marvel Heroes sounds like a great game on paper, but it turns out to be pretty forgettable.  It’s initially quite fun, flying around and taking down hordes of enemies and famous supervillains, but the gameplay gets repetitive quite quickly.  The fact that there is presently only one storyline in the game also doesn’t lend itself to repeated play. The additional heroes in the store are expensive and also don’t offer much different to what you get to free, which is bothersome.

It’s free, though, so if you have any interest then you have nothing to lose in trying it.  If you get some friends to play with you, the instances will be more fun as there’ll be some co-ordination which you don’t get in random groups.  Just don’t expect to still be playing this in a few months.

Mike is Brutal Gamer's Indie Editor. He has been playing video games since the early 90s and is fond of racing games, puzzlers and MMOs. Typing /played while in WoW makes him cry, but not enough to stop him playing some more.
@Ognawk
Previous Tecmo Koei changes Dynasty Warriors 8 release date
Next Rezzed Hands-On: Full Mojo Rampage