Marvel reveals the cover of Infinity #2

Cap doesn’t look all that happy. 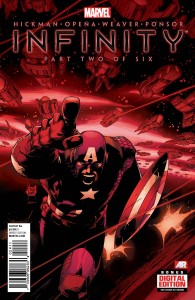 Although to be fair, that’s probably because he’s got to try and unite an army of heroes from across the galaxy to fend off a brand new threat. And Thanos- can’t forget him.

This September, the Marvel Universe fights for survival in the biggest battle it’s ever faced – but first, Marvel is proud to unveil the jaw dropping main cover to Infinity #2 by Adam Kubert! Infinity, the six part blockbuster comic event of the summer, brought to you by the star studded creative team of Jonathan Hickman, Jim Cheung, Jerome Opena & Dustin Weaver, takes fans to every corner of the Marvel Universe, and beyond! Earth has been marked as an “Avengers World”, protected by Iron Man, Captain America, Thor and more from the deadliest threats facing humanity. A powerful and destructive race is on a collision course with Earth and the only thing in their path is the Avengers! But even Earth’s Mightiest Heroes realize the one hope of defeating this dire threat is to unite every great hero across the cosmos…because only with a united Avengers Universe is there any chance of survival!

I was kind of under the impression that Infinity wasn’t going to feature the actual Avengers all the much and that they were simply going to be out of the picture for a while. Since they were gone, I thought the actual Infinity book was going to focus on Black Bolt and the rag-tag team of heroes that comes together to fight the Mad Titan.

From the looks of issue #2’s cover though, it looks like Infinity will indeed have plenty of Avengers and feature a war on two fronts. We’ll have to see how Marvel and the creative minds behind the story manage to balance that, not to mention link the two tales up for the combined ending that is seems to be heading towards.

Look for Infinity #1 from Marvel Comics to hit stands this August.

Jason's been knee deep in videogames since he was but a lad. Cutting his teeth on the pixely glory that was the Atari 2600, he's been hack'n'slashing and shoot'em'uping ever since. Mainly an FPS and action guy, Jason enjoys the occasional well crafted title from every genre.
@jason_tas
Previous Is Arkane Studios working on Prey 2?
Next New Assassin’s Creed IV books announced