Crysis 3 expands with the Lost Island

Crysis 3 goes from the Liberty Dome to the jungles of the West Pacific in one big, bad multiplayer addition. 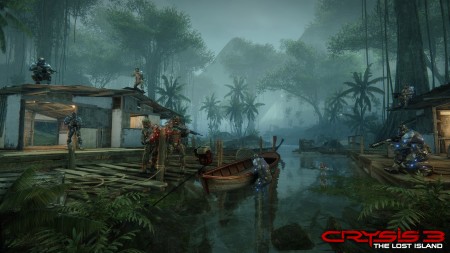 In Crysis 3: The Lost Island, traces of a mysterious alien presence have been discovered on a small island in the Philippines 200 miles from Ling Shan. Rebel forces have been dispatched to destroy this unknown extraterrestrial entity before an elite CELL team has the chance to obtain it… by any means necessary.

The Lost Island includes four new maps and two modes of play – Frenzy and Possession. So why the change of setting for the DLC? Crytek CEO Cevat Yerli says that by moving Crysis 3 away from its New York ‘Liberty Dome’ setting and into the tropics, “…we’re not only returning to Crysis’ spiritual roots, but also introducing fresh ways to play that provide Crysis 3 fans with genuinely game-changing new tactical options, game modes and weapons.” Hard to argue with that.

It’s been a while, but Crysis did indeed start out on a tropical island back with the first game in the series. If you don’t remember that, it’s probably because no one could play the game when it was released because of the super-high system requirements. I personally remember having a ripping frame rate of about 10fps on my older Alienware rig at the time… good times.

Fortunately that’s all a thing of the past as Crysis 3: The Lost Island is probably one that you don’t want to miss out on if you’re a fan of the series. And if you’re looking to grab a copy for yourself,  make sure you’re around your Xbox 360, PS3 or PC on June 4th. That’s when it arrives for 1200 MS points or $14.99 USD respectively.

Jason's been knee deep in videogames since he was but a lad. Cutting his teeth on the pixely glory that was the Atari 2600, he's been hack'n'slashing and shoot'em'uping ever since. Mainly an FPS and action guy, Jason enjoys the occasional well crafted title from every genre.
@jason_tas
Previous Sega re-imagines Castle of Illusion
Next Warhammer Quests to iOS App Store