The Metro saga changes publishers with a sequel that impresses on almost every level. 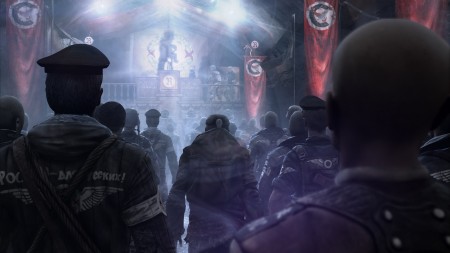 Metro: Last Light has had a kind of strange trip on its way to market. Developed by 4A Games, Last Light was left publisher-less when THQ went under in 2012. The game was quickly picked up by Deep Silver (of Dead Island fame) though and it’s a very good thing that it was.

If you’re unfamiliar with the story of Metro, it’s actually fairly unique stuff. In the wake of a massive nuclear war, the Earth has been left a barren wasteland. Most of the surface is unlivable and the places that aren’t are under constant threat by hideous mutants. Bottom line- it ain’t too pretty up above and what’s left of humanity (well, what’s left of Russia anyway) has been driven underground into the relative safety of the Metro subway system. There mankind forges a hard life (to put it mildly) in the sprawling tunnels and stations that have escaped irradiation.

Metro is based on the series of books of the same name by Russian author Dmitry Glukhovsky. It should probably be mentioned for fans of that series though that, although Last Light is the sequel to the Metro: 2033 game, it is not based on the novel sequel to Metro 2033, Metro 2034. I’ve never read the books myself, but Metro: Last Light has seriously made me want to. 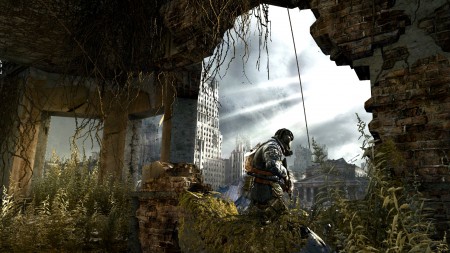 Last Light picks up where 2033 left off, so if you played the first game, you’ll be right at home here. As the game kicks off, The Order (one of the sects that rules over huge parts of the Metro system) has launched an all out assault on a mysterious group of creatures known only as the ‘Dark Ones’.

Believed to be a deadly threat, The Order has all but wiped out these strange beings- except for one. From there Metro: Last Light tells the twisting, turning tale of main character Artyom as he fights his way across the system on the hunt for the last Dark One. As he does, a full on war between the Reds (Soviets), the Reich (Nazis), and the Order bubbles up around him.

The story is a compelling one and had me from the opening shots. That’s something that Metro 2033 just didn’t do for me for some reason. 4A Games has created a rich background for pretty much every area you find yourself in in Last Light with visual splendor to match. There are some great interactions with NPC’s and enemies alike, some terrifically heavy tension in parts, and so much atmosphere in general that you could choke on it. If you’re a fan of ‘complete’ worlds with rich backstories, you’ll love Metro: Last Light.

Bringing that atmospheric landscape to life is the excellent graphic engine. In this area, the PC version is head and shoulders above all others, but the game is no slouch on the Xbox 360 either. And while it’s not quite ‘next gen’ quality, Metro: Last Light nonetheless is a very pretty game… in a dark and dingy, post-apocalyptic way of course. 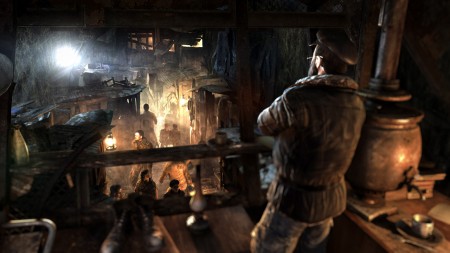 The level of detail is fantastic and environments, both above and below ground, have a heavy, crumbling and worn look to them. The tunnels and platforms of the Metro look appropriately lived in; used and abused by permanent guests who would really rather not be there. The visuals of Last Light tells a story all its own and bear some serious gawking at times.

Much like the visuals in Metro: Last Light, the audio work that 4A Games has put into the game is terrific. As far as vocals, Artyom is unfortunately a ‘silent protagonist’. He doesn’t say anything during the actual gameplay, though he does narrate between missions and he’s voiced well enough there. Not that the silent protag is anything new in FPS’, but I’m always a little disappointed that the character I’m playing as doesn’t have any lines or discernible personality.

While I found Artyom a tad disappointing, the supporting cast is excellent and does a great job with what is a well written script. A slight oddity here is that the cast all deliver their lines with a Russian accent which strikes me as a little odd considering they’re all supposed to be talking in their native tongue. I’m always put off a little when this is done in movies and apparently that’s true (for me at least) in games as well. It’s certainly no real strike against Last Light, just something that bugs me in general.

Thankfully not buggy at all are the controls, which are spot on. Aside from the usual FPS control system, which does just fine here, Metro has some interesting additions that are specific to the post-apocalyptic setting. For instance, Artyom can use a lighter to burn spider webs or check his compass or map in low light. He can also use his flashlight to brighten dim areas of the Metro and don his gasmask for jaunts out onto the toxic surface of the Earth. 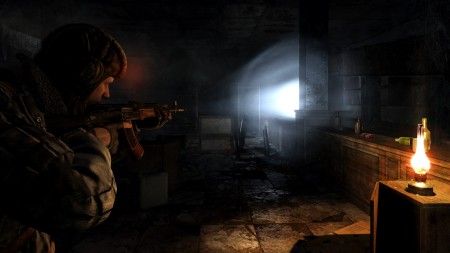 The gasmask is actually a whole mechanic unto itself as you need not only wear the mask, but make sure your air stays clean with filters. The filters make the surface missions even more tense (not that blasting away at hordes of mutants isn’t enough) as you pretty much need to make sure you have a glut of cartridges in stock at all times. The alternative is that you risk running out if you can’t seem to find your way around the scorched Earth. This is something that I speak of with some authority by the way, so listen when I say that whenever you get the chance to grab a filter, do it. Just… trust me on that one.

Metro: Last Light was an extremely pleasant surprise for me. As I had only limited interaction with the first game in the series, I didn’t really know what to expect from its sequel other than an overdone premise- or so I thought. The truth is that the world of Metro couldn’t be further from cookie-cutter and never stopped holding my interest all the way through.

As much as I like them, shooters can be kind of ‘one speed’ games as a rule too and Metro: Last Light bucks that trend as well. 4A Games’ latest presents a well crafted action/adventure that plays like a dream and is drenched in atmosphere.

It’s dark, it’s violent and it’s a franchise that I hope sticks around for a long, long time.

Jason's been knee deep in videogames since he was but a lad. Cutting his teeth on the pixely glory that was the Atari 2600, he's been hack'n'slashing and shoot'em'uping ever since. Mainly an FPS and action guy, Jason enjoys the occasional well crafted title from every genre.
@jason_tas
Previous Marvel releases the first trailer for Avengers Assemble
Next Saints Row IV trailer launches some ET’s