Home / Comics / The New Avengers head into Infinity this Summer

The New Avengers head into Infinity this Summer

Marvel Comics’ massive Infinity event is set to be one of the landmark events of the Summer in any entertainment medium, and a big part of it will be the New Avengers starting with issue #9. 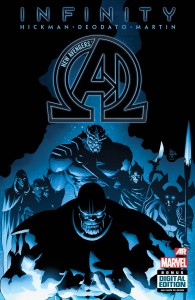 With the Avengers fending off an intergalactic threat on the edges of the Marvel Universe, Earth becomes the most vulnerable planet in the system! Enter Thanos, the galaxy’s most ruthless threat and an unparalleled force of brutality who brings order to the chaos of life through murder. Earth’s last hope may lie in the hands of a man who can level cities with a single whisper – Black Bolt, king of the Inhumans. But is the combined might of the clandestine group of Avengers enough to push back Thanos and his deadly group of lieutenants – the Cull Obsidian?

I’ve been more than a little cool on ‘big crossovers’ in recent years, but I have to admit that Infinity has me stoked. Maybe it’s that I’m a big fan of the Infinity Gauntlet story (and even Infinity War truth be told), but there are so many little bits of fan service in the Infinity teasers that I’m finding it hard not to get excited.

As for New Avengers, Marvel says that you don’t really need to grab all the crossed books to enjoy Infinity, but this might be one to add to your checklist:

“As with Avengers, Jonathan’s issues of New Avengers are a critical part of the overall Infinity story. There are elements that were set into place in the earliest issues of the series that he and Deo will be paying off on here.” explained Executive Editor, Tom Brevoort, Marvel Entertainment. “You could maybe enjoy INFINITY without them, but you’re really not going to want to.”

Jason's been knee deep in videogames since he was but a lad. Cutting his teeth on the pixely glory that was the Atari 2600, he's been hack'n'slashing and shoot'em'uping ever since. Mainly an FPS and action guy, Jason enjoys the occasional well crafted title from every genre.
@jason_tas
Previous Bethesda blasts out all new Wolfenstein screens
Next The Deck system explained in Wargame: Airland Battle