Often the words ‘downloadable online multiplayer shooter’ strike fear into a gamers heart. They’ve not been exactly great over the years, have they? I could probably name one, possibly two that have arrived over the past few years and have been rather good. Usually the genre is full of… well, crap for lack of a better word. 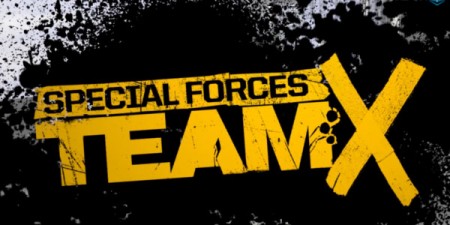 For the above reasons, I had my doubts about Special Forces Team X. But I was ever so slightly wrong about it. This fast paced third-person shooter is rather fun. It does take a while to get into, but once you’ve played a few matches and learned the ropes you get to be fairly good at it and the game grows on you even more with every play.

The map designs are fairly decent for an arcade-type game; the maps come in three sections that the players vote on. The voting system for the each section of the map is quite unique too as you can slide sections of the map in and out, and the section that has the most people looking at it wins. It’s almost like personalizing your own playing field. Also, graphically the game is unique. There are not many shooters out there that are cell shaded, I can’t think of any anyway. Well, other than Borderlands…..and Rage. 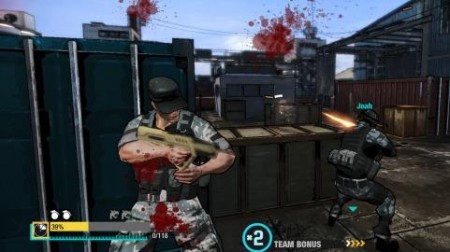 The game mode I found more fun personally was the standard Team Death Match (TDM)- granted that’s not the most adventurous of modes to pick as a favourite, but it is the least frustrating. HvT is worth a bash too, it’s pretty much TDM but you have a set target to eliminate, on elimination, you then become the ‘HvT’, and you’re then targeted by the enemy team as your team tries to protect you. Whoever has the HvT on their side at the end of the match, wins! 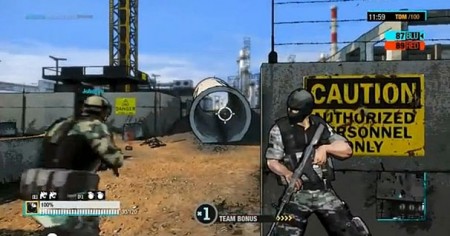 Not dissimilar to most shooters nowadays, you get load outs too. The load out system on Special Forces Team X looks more complicated than it actually is. You have two load out options ‘A’ and ‘B’ (They went all out naming those, eh?), to change weapons or special slots (where the grenades are) you simply highlight and press A on the slot you want to amend, then pick a weapon that you’d like to use. Most weapons unlock at a certain level – as it does in standard XP related shooters, the more you play, the better weapons you’re rewarded with. 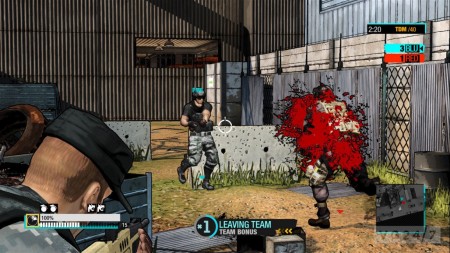 As you can see, I’ve compared this to a lot of shooters that people are already familiar with. Which is where its downfall lies, there’s nothing new here. If you’re looking for a change of scenery from the usual Battlefield, Call of Duty or Ghost Recon, then give this a look- it’s fun and familiar and fairly easy to get to grips with. But I do feel the title could have been stronger if it had a co-op campaign or even a single play campaign for that matter.

Both of which are modes that Special Forces Team X lacks. This one is solely competitive, team multiplayer.

While coming into this with a pessimistic preconception on what Special Forces Team X was going to be like, I was pleasantly surprised. This is a welcome change of pace from the usual Call of Duty, Battlefield, Gears of War, and Ghost Recon titles that we’re all used too. The unique graphics take the ‘seriousness’ out of the competitive nature of the game, which is awesome if you get easily frustrated by overly competitive multiplayers.

The only real impediment is that the price could prove to be a stumbling block for many since, again, the game only carries multiplayer. I’d love to see what the developers Zombie Studios could do with a bit of a fuller game experience.