Win a copy of Dead Space 3 from Brutal Gamer

Want a free copy of Dead Space 3? Get ready to slice and dice some Necromorphs, courtesy of your pals at Brutal Gamer.

The just released third episode in EA and Visceral Games’ action/horror franchise is chewing up the charts here in early 2013, and now you can grab a copy for yourself (for Xbox 360, PS3, or PC) free of charge and on the house.

Now that we have your attention, here’s the nitty-gritty on how to enter.

How to enter – Unlike slicing up Necros, entering the Dead Space 3 contest is simple. Just ‘like’ us and comment on this post on Facebook or follow us on Twitter @BrutalGamer and Tweet us with the phrase ‘get your Dead on‘ any time between now and the contest end time. You can enter as many times as you like, but only once per day. Any double entries made on the same day will be discarded (but your original entry will still stand). 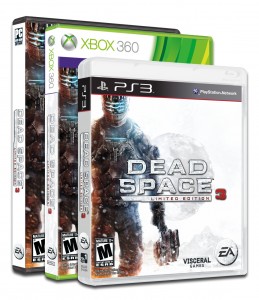 The game is open to those in both the US and UK so what are you waiting for?! Get to ‘liking’ and Tweeting folks! There’s a universe to save… and lets face it, those necromorphs aren’t going to slice themselves up.

Jason's been knee deep in videogames since he was but a lad. Cutting his teeth on the pixely glory that was the Atari 2600, he's been hack'n'slashing and shoot'em'uping ever since. Mainly an FPS and action guy, Jason enjoys the occasional well crafted title from every genre.
@jason_tas
Previous Crysis 3 starts the hunt in new trailer
Next First screens of Battlefield 3: End Game released