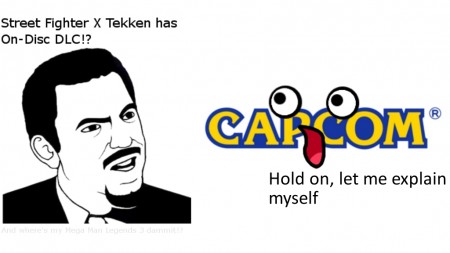 Recently it was discovered, surprisingly to no one, that DLC was found on the disc of the retail version of Resident Evil 6.  Capcom, no stranger to this controversy, had a quick explanation. Refuting the earlier claim that there was no DLC on the disc to begin with, contrasting the claims of those who found it.

Capcom claims the on disc DLC is in fact “incomplete” (see Mass Effect 3) DLC that will be offered for free.  However, a download will be required to access the on disc DLC, which includes a new co-op and stand alone difficulty modes, is the only on disc DLC and that no paid DLC has anything on the retail discs.

An update is to arrive “soon”.

The kid said, "Get ready cause this ain't funny My name's Mike D. and I'm about to get money." Pulled out the jammy aimed it at the sky He yelled, "Stick 'em up!" and let two fly Hands went up and people hit the floor He wasted two kids that ran for the door "I'm Mike D. and I get respect Your cash and your jewelry is what I expect"
Previous Just Dance 4 – Review (Xbox360)
Next Ugly-Mimobots announced at NYCC