There’s a lot of the Dark Knight coming to comics shops this December, as Fear State winds down the Batman leaves Gotham behind.

Batman is leaving Gotham City. Presumably that won’t be ‘for good’, but at the very least it’ll be for a 4 issue spread, as Batman #118 takes the hero out of his city, and puts him on the trail of a new villain called Abyss. Expect Batman Inc. to play a part in the tale too.

But while he’s out and about, Gotham will have plenty of heroic stories to tell in the form of Shadows of the Bat. No, the classic 90s series isn’t back, Shadows is a new 12 issue arc in Detective Comics, that looks like it’ll star a who’s-who of the Bat-family. Oh, and an overrun Arkham. Can’t forget that.

Some fresh comics launching in December include another Bat-centric book with Batgirls, headlined by Barbara Gordon, Cassie Cain’s version of Batgirl, and Spoiler. More new stuff hitting stands include the Superman prequel World of Krypton, and the all-new team book One-Star Squadron.

Scroll down to check it all out, in detail.

BATMAN #118 is on sale December 7, and the mystery deepens in BATMAN #119, on sale January 4, as Batman teams up with Batman Inc.’s new benefactor.

Expect thrills and chills as Batman dives into the shadows once more.

Out of the ashes of Arkham Asylum, Arkham Tower rises in Gotham City… but the tower soon falls to the inmates and Batman’s allies are drawn back into the madness at the heart of Gotham, and the plans of the mysterious Dr. Wear.

The story kicks off with a prelude Issue #0 in November’s DETECTIVE COMICS 2021 ANNUAL, co-written by Mariko Tamaki and Matthew Rosenberg (TASK FORCE Z), with art by David Lapham (STRAY BULLETS)  and Trish Mulvihill (BIRDS OF PREY). Get ready for SHADOWS OF THE BAT, as Mayor Nakano signs off on the new Arkham Tower, and Batman and Nightwing grapple with their opposing ideas on the place of Arkham in Gotham City, and with a new villain, THE MAEGER MAN. The story continues in DETECTIVE COMICS #1047, on sale January 4.

DC is launching BATGIRLS, a new ongoing series this December from the dynamic writing duo Becky Cloonan and Michael Conrad (WONDER WOMAN), and artist Jorge Corona (WE ARE ROBIN).

Batgirls Cassandra Cain and Stephanie Brown, who are only able to navigate the dark, gritty, and oftentimes scary Gotham City by leaning on each other’s friendship.

Mentored by Oracle, the Batgirls move to the other side of town where Barbara Gordon can keep a better eye on them while the hacker Seer is still invading their lives. Steph may be too rash sometimes, and Cass doesn’t speak much—but what they lack in similarities they make up for with their mutual respect and love for each other…and what makes them stronger together as Batgirls! This rebellious group of Super Heroes team up to kick ass, and try to make it as normal teenagers in this pizza slumber party of a series, packed with energy, attitude, and friendship.

On sale December 14, with gorgeous art and eye-popping colors, BATGIRLS sings with the energy of The Linda Lindas rocking out to “Claudia Kishi,” in this all ages title for every fan who’s ever wanted to break curfew go joy-riding in a villain’s muscle car with their bestie. Which… isn’t that all of us?

And don’t miss BATGIRLS #2 on sale January 11! With their new secret muscle car and their new secret patrol route, Cassandra Cain and Stephanie Brown find moving to their new neighborhood— thanks to Oracle instructing them to “lay low”—that much easier to bear because they have each other. Steph begins witnessing some strange actions through the window of the building across the street and can’t help but investigate if the recent murders are connected to them! Meanwhile, Oracle realizes the most effective way for the girls to wear her newly upgraded comms is by piercing their ears, and Cass freaks out!

Meanwhile, on Krypton, writer Robert Venditti (GREEN LANTERN, THE SURROGATES) and artist Michael Avon Oeming (POWERS) are going back in time in this modern telling of one of the most storied periods in comics in WORLD OF KRYPTON. When a catastrophic event befalls Krypton’s natural world, it points toward a mass extinction in the making. Jor-El, head of Krypton’s revered Science Council, embarks on a mission to save a world that may already have passed the point of no return.

This six issue miniseries shines new light on the famous characters of Krypton’s past—including Jor-El, General Dru-Zod, and even a young Kara Zor-El—World of Krypton combines action, cosmic wonder, and political intrigue in a story as much about our world as the one on the page.

WORLD OF KRYPTON #1 is on sale December 7.

One of the great artists of modern DC history, Doug Mahnke (JLA, FINAL CRISIS), joins Lemire on this gory, gruesome monster mash where the fate of humanity rests in the hands of someone who isn’t human at all.

The Earth is all but done. The last remnants of humanity cling to a mountaintop island lost in endless floodwater. The Parliaments of the Green, the Red, and the Rot all agree: it’s time to wipe the slate clean and start the cycle of life over again. And to do so, they’ve united their powers to summon an avatar—one of the most horrific monsters to ever stalk the surface of this forsaken planet. Against a creature like that, there can be no fighting back…unless you have a soldier who understands the enemy. Someone who has used its tactics before. Someone like Alec Holland. Shame he’s been dead for decades…

On sale December 28, SWAMP THING GREEN HELL is a dark, dystopian tale for the ages.

ONE-STAR SQUADRON is DC’s Super Hero team, where heroism meets capitalism. This ragtag group of heroes led by Red Tornado is here to provide service with a smile. All you have to do is send a request via their on-demand hero app and they’ll answer any call. Whether it’s a children’s birthday party or an alien invasion, no job is too small or too big in this story about the Super Heroes without a billion dollar fortune or Fortress of Solitude to fall back on… heroes like Red Tornado, Power Girl, Gangbuster, and Minute Man. Follow these working stiffs as they work for a living while trying to parse one of the great mysteries of the world–just who’s signing those checks and why?

Issue #1 is on sale December 7 in a story packed with heart, heroism and humor, and that hits close to home for everyone who’s ever worked an embarrassing, mind-numbing or menial gig. So, all of us, that one is definitely all of us.

Jason's been knee deep in videogames since he was but a lad. Cutting his teeth on the pixely glory that was the Atari 2600, he's been hack'n'slashing and shoot'em'uping ever since. Mainly an FPS and action guy, Jason enjoys the occasional well crafted title from every genre.
@jason_tas
Previous Trailer: “Survival RTS” Age of Darkness: Final Stand finds a home with Team17
Next Trailer: Action/platformer Steel Assault coming to Switch on September 28th 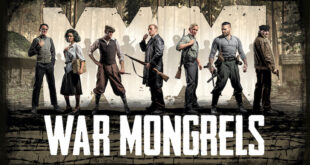 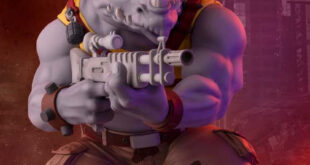