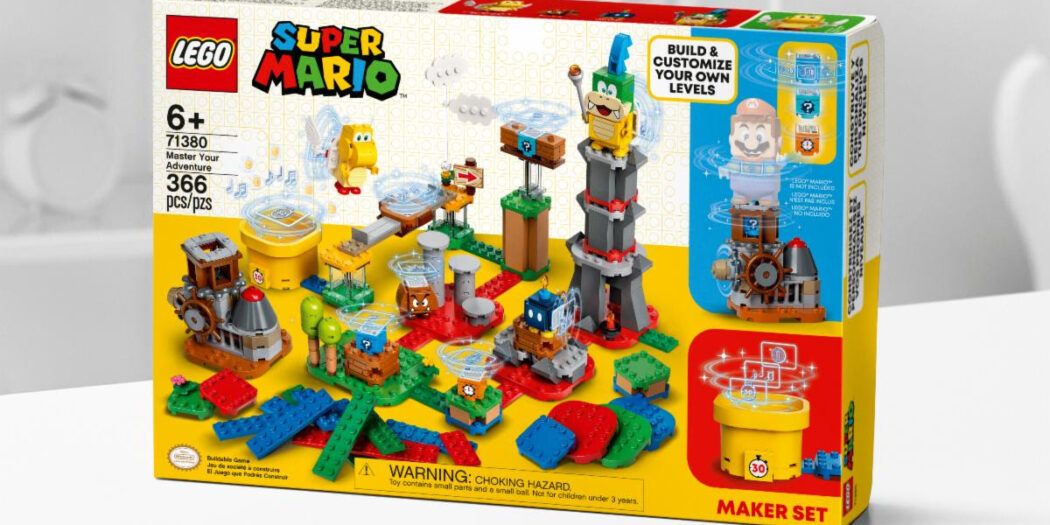 Set to hit retail just as the new year dawns, a fresh selection of LEGO Super Mario sets will have Chain Chomps, the Tanooki Suit, and a poison ‘shroom.

One of the coolest things to come out of 2020, LEGO Super Mario has apparently been quite the hit for both LEGO and Nintendo. The sets eschew the usual non-interactive nature of traditional LEGO building experiences for something all together unique.

Fans can actually build and play courses with LEGO Super Mario, thanks to an electronic component that brings the Mario figure to ‘life’. The line is massive too, incorporating many of Mario’s best-loved elements and villains, all of which can be sprinkled into courses.

Now it’s about to get way bigger with the addition of a monster new selection of Mushroom Kingdom elements. That includes new accessory packs, a new create-your-own course pack, and a fresh biome. Added to the already existing “water (blue), fire (red), sand (yellow) and grass (green)” will be purple, the poison paradise known as The Soda Jungle. LEGO promises all new reactions from Mario as to this one.

New sets will intro additional characters and suits like “Piranha-Plants, Larry, a Goomba, Wiggler, and Koopa Paratroopa”, as well as the Penguin Suit.

As for the second wave of character packs, fans can expect:

And finally, that creation set will offer:

Using the Customization Machine included in the Maker Set, children can change how LEGO Mario reacts to three Special Bricks, offering variety in play, excitement and an element of surprise. The Maker Set also introduces a new special Start Pipe that will shuffle the known rules of the level play, in that players are challenged to reach the Goal Pole in less time, yet with increased rewards up for grabs. The Maker Set comes with 366 pieces, all selected to ensure that children can unleash their creativity and customize their own levels for themselves or other players.

All of the above will launch just after the holidays, on January 1st, 2021.

Jason's been knee deep in videogames since he was but a lad. Cutting his teeth on the pixely glory that was the Atari 2600, he's been hack'n'slashing and shoot'em'uping ever since. Mainly an FPS and action guy, Jason enjoys the occasional well crafted title from every genre.
@jason_tas
Previous Trailer: New maps and gear hitting for Skater XL next month
Next Nickelodeon tells its story in The Orange Years