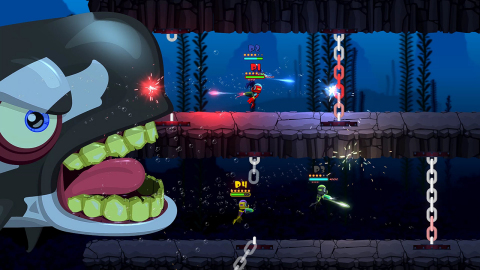 A pretty quiet week on the Switch brings underwater multiplayer action with Swimsanity. Though there isn’t much else, outside of a few niche titles.

You might not have heard of Swimsanity, but it actually does look kind of neat. The game is a multiplayer affair, where players can battle either as a team, or against one another. It looks cartoony, and kind of like it might be a good time. Other than that though, there ain’t much.

This week brings Burger Time (the arcade game), and… a bunch of other stuff of dubious quality. Scroll down to check it all out.

Jason's been knee deep in videogames since he was but a lad. Cutting his teeth on the pixely glory that was the Atari 2600, he's been hack'n'slashing and shoot'em'uping ever since. Mainly an FPS and action guy, Jason enjoys the occasional well crafted title from every genre.
@jason_tas
Previous The final season of Street Fighter V fills out the roster
Next Serious Sam 4 re-dated, coming up in September