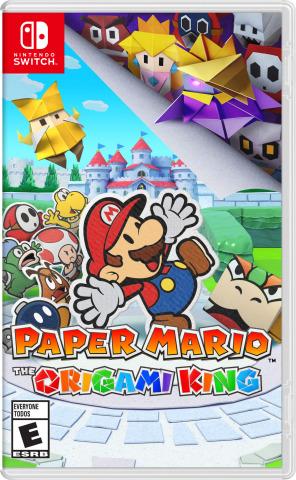 Nintendo dropped a nice little surprise for Super Mario fans today, with the reveal of Paper Mario: The Origami King. The game hits the Switch this July.

Folding up a new adventure

When it comes to unique looks, no Mushroom Kingdom-centric series matches Paper Mario. Around for several generations at this point, Paper Mario usually takes the staple cast of characters and thins them out, turning all into paper facsimiles.

It’s an original look, but one that does more than just make superficial changes, as it also affects gameplay. For the latest in the set, today’s freshly announced Paper Mario: The Origami King, that’s kicked up a significant notch.

This time around, Princess Peach has invited the Mario Bros. to the Mushroom Kingdom’s origami festival. But if you thought that meant The Origami King would be a party game, you haven’t been paying attention.

“Paper Mario: The Origami King delivers a grand new adventure on Nintendo Switch for players to wrap themselves up in,” said Nick Chavez, Nintendo of America’s Senior Vice President of Sales and Marketing. “This game marks the debut of the Paper Mario series on Nintendo Switch, expanding the vast library of games with another standout entry in a beloved franchise.”

Tried and true, but also new

Colorful and with plenty to do, The Origami King looks to carry on the paper craft tradition of the series. But aside from the visuals, the game is also set to offer new gameplay.

As you can see in the trailer, Mario now has access to the 1000-fold Arms. Those are going to be important, since they’ll allow gamers to “interact with the landscape by stretching out and pulling, peeling and revealing new locations, helping you to solve puzzles and uncover unexpected surprises.” On top of that, Mario will enlist the aid of both friends and enemies (like Bowser), and solve plenty of puzzles and mini-games.

Then there’s the ring-battle system.

Paper Mario: The Origami King also introduces a new ring-based battle system that lets you flex your puzzle-solving skills to line up scattered enemies and maximize damage. While the enemies may be crafted from paper, these dynamic, turn-based battles are far from stationary. It’ll require a sharp mind to make short work of these crafty enemies.

Ready to fold up a new adventure? Paper Mario: The Origami King arrives for Nintendo Switch on July 17th.

Jason's been knee deep in videogames since he was but a lad. Cutting his teeth on the pixely glory that was the Atari 2600, he's been hack'n'slashing and shoot'em'uping ever since. Mainly an FPS and action guy, Jason enjoys the occasional well crafted title from every genre.
@jason_tas
Previous Mezco’s exclusive new Blade figure is up for pre-order
Next The long-awaited origin of The Maestro is on the way