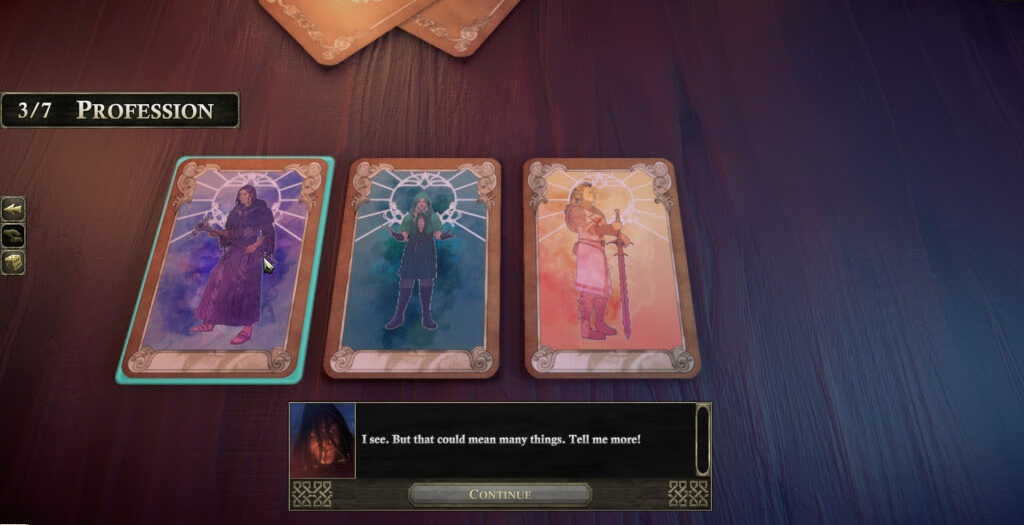 Here’s character creation in The Dark Eye: Book of Heroes

Looking forward to the video game version of The Dark Eye series of RPG’s? Then you might want to get a look at the game’s character creation suite.

If you play role-playing games often, then you more than likely have forged more than a few characters over the years. After all it is a part of almost every RPG, no matter the sub-genre, in some way.

The new adaptation of longtime tabletop role-player The Dark Eye won’t differ in this. Though it will get the job done in a somewhat unique way. According to Wild River Games, Book of Heroes will use more than just a “batch of numbers” to build your character.

The game will have a full character creation suite that works through cards dealt by a fortune teller. Sound weird? Once you get into what the mechanic offers, it seems pretty cool. The fortune teller asks questions about your hero’s life, more or less. And it’s how you answer these questions that tells your character’s tale, including their “stats, skills, and story”.

Kind of neat that, and definitely something that feels a little different from the tried and true. As for The Dark Eye: Book of Heroes itself, the game will offer both online and off questing in the mythical land of Aventuria.

Jason's been knee deep in videogames since he was but a lad. Cutting his teeth on the pixely glory that was the Atari 2600, he's been hack'n'slashing and shoot'em'uping ever since. Mainly an FPS and action guy, Jason enjoys the occasional well crafted title from every genre.
@jason_tas
Previous See Robocop, Fujin, and Sheeva in action in new MK11 trailer
Next Dark Horse to adapt Alter Nation with graphic novel