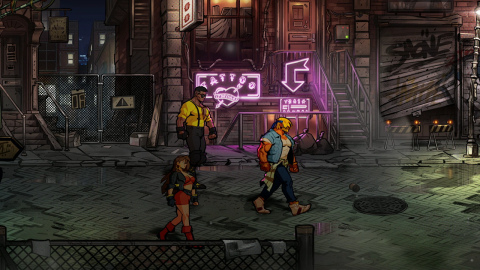 Streets of Rage 4 makes its long awaited arrival today on Switch, along with Book of Demons, and a… Splatoon… 2… demo?

Yes, Splatoon 2 gets a demo on Nintendo’s Switch this week. Why? Well, there’s apparently a special event happening in the almost three year old game. Sort of. In this special demo, players can engage in 4 on 4 Turf Battles, and Ranked Battles and the co-op mode for Salmon Run are also included. I’m not sure why the “Special” is attached to this Special Demo, but it is.

Much bigger news, arguably, is that Streets of Rage 4 is finally here. Built just like the classics on the Sega Genesis, SoR4 updates the familiar series with some excellent looking new graphics and characters. What it definitely seems like it keeps though are the fighting mechanics. And if you’ve ever played SoR, then you know that’s a very good thing.

Streets of Rage 4 isn’t alone though, as this week also brings the Sega Ages version of G-LOC, as well as more multiplayer action for Luigi’s Mansion 3, the cardboard-inspired Book of Demons, and lots more.

Jason's been knee deep in videogames since he was but a lad. Cutting his teeth on the pixely glory that was the Atari 2600, he's been hack'n'slashing and shoot'em'uping ever since. Mainly an FPS and action guy, Jason enjoys the occasional well crafted title from every genre.
@jason_tas
Previous Dread Nautical brings Lovecraftian horror today
Next Burnout Paradise speeding onto Switch in June