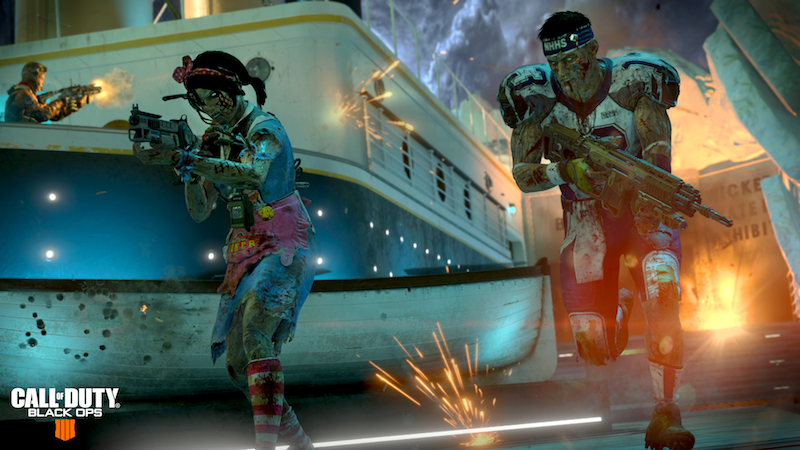 Activision has released a few new screenshots and plenty of details for the latest zombie expansion for Call of Duty: Black Ops 4.

If you’re a Call of Duty zombies fan, then you knew this was coming. Chances are too, that you were pretty pumped for Operation Apocalypse Z. What we have here is the latest in a series of “community events” for Black Ops 4. As you might gather, Apocalypse Z is all about the undead. The DLC is set to bring a little of the game’s famous zombies mode to every corner of the main game.

No, that doesn’t mean that you’ll encounter zombies in standard multiplayer maps. You will though, find an “eerie atmosphere” added to the Blackout mode. And there’ll be special “zombies” themed personalization goodies for you to customize your character with. More than just that though, the Aether storyline of zombies makes its triumphant return too.

All together, there’s an impressive mix of free and paid DLC on the way. As usual this generation, it’ll all be coming to the PlayStation first, followed by all other platforms.

“We have a team of talented storytellers that have been helping to craft Zombies experiences for more than 10 years, and we wanted to bring that imagination to every mode of Black Ops 4, which is why we’re excited to put Operation Apocalypse Z in player’s hands,” said Dan Bunting, Co-Studio Head, Treyarch. “This is a veteran team that strives to do their best work with each new experience and this is no exception – Operation Apocalypse Z represents a ton of creativity and passion from everyone to really immerse fans in our unique world of the undead.”

“We can’t wait for the Zombies faithful to experience Alpha Omega, which marks the return of the Aether story and the opportunity to play as both the Primis and Ultimis crews – it’s a unique mix of gameplay that has truly been inspired by our community of fans,” said Mark Gordon, Co-Studio Head, Treyarch. “This map is over four times larger and features more dialogue than the Nuketown you’ve played before, and combined with everything else that’s coming in Operation Apocalypse Z, this is our most exciting season to date.”

Some of what’s included in this new content drop is indeed free of charge. That includes:

As you’d expect, even with that sizable inclusion of free stuff, the best new downloadables are of the paid variety. You’ll get all of the following if you have the season pass though. So for some of the CoD faithful out there, you kind of already own this and just need to hit the download.

Jason's been knee deep in videogames since he was but a lad. Cutting his teeth on the pixely glory that was the Atari 2600, he's been hack'n'slashing and shoot'em'uping ever since. Mainly an FPS and action guy, Jason enjoys the occasional well crafted title from every genre.
@jason_tas
Previous SDCC 19: Warners brings Pokemon and Shazam! to SD
Next July Switch Online games revealed, plus rewind feature