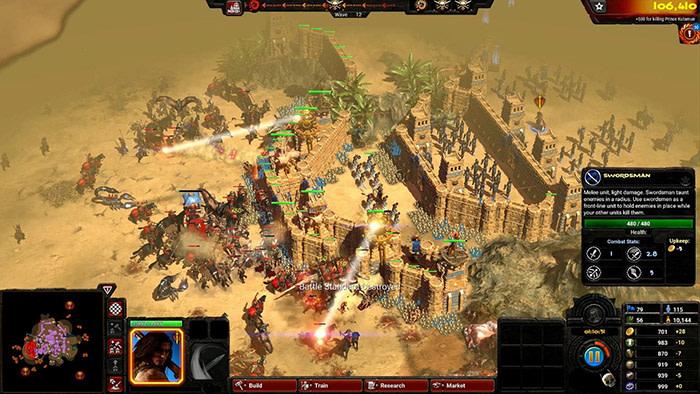 It’s a surprise attack! PC real-time strategy title Conan Unconquered will be landing early, by one day. Check out the latest trailer after the break.

“We’re eagerly looking forward to launch and to getting Conan Unconquered into the hands of players. The game has really come together and although the skill cap is high, it’s tremendously fun to play,” says Lawrence Poe, Chief Product Officer at Conan Unconquered publisher Funcom.

As you can see, Conan Unconquered is no ordinary real-time strategy game. The title gets rid of several conventions of the genre, and places players in a city to start.

Their job is to defend said city, by any means. You’ll have armies to command, buildings to construct, and heroes to field. All of that will be done in the name of defense though, as you repel the invading hordes to save the city that you’re in command of.

And while you might not think immediately think multiplayer lends itself to that play style, you might think again. Unconquered does indeed feature multiplay, with both players cooperating to hold the walls of the city up. That means double the heroes, and an increase of deadly foes.

For strategy fans, that could make Conan Unconquered one to watch out for. Announced today, they can expect that launch one day earlier than announced too.

Unconquered will arrive on the PC next Wednesday, May 29th.

Jason's been knee deep in videogames since he was but a lad. Cutting his teeth on the pixely glory that was the Atari 2600, he's been hack'n'slashing and shoot'em'uping ever since. Mainly an FPS and action guy, Jason enjoys the occasional well crafted title from every genre.
@jason_tas
Previous Behold the tale of Warhammer: Chaosbane
Next Ematic Protective Carrying Case Review