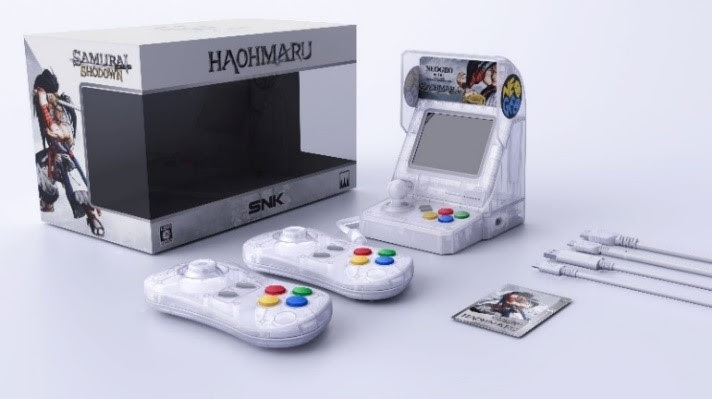 Samurai Showdown is back in a big way this year. The first original game in the series in a good long time is coming out soon, and SNK has a limited edition treat for fans to celebrate.

The publisher has just announced a trio of Samurai Showdown-branded NeoGeo Mini consoles. All three of the units are the same in content, but will include unique deco and extras, plus two controllers. All three will include the full roster of games that the Japanese version of the console launched with last year too.

Overall, that’s 40 games, including all of the Samurai Showdown games that launched on that original NG hardware. Before you ask, the new Showdown one won’t be included. This console is purely “retro” in flavor.

The NEOGEO Mini Samurai Shodown Limited Edition will have three translucent variations: Haohmaru (White), Nakoruru (Red), and Ukyo Tachibana (Blue). Each color is limited to 20,000 units, and each unit will feature with two controllers, one collectable character card, one HDMI cable, one USB power cable, one anti-slip cushion and character stickers. This Limited Edition ver. features 40 titles including all six Samurai Shodown titles released on the NEOGEO platform.

Pre-orders for the Samurai Shown Minis will open up on May 24th, and they’re expected to ship out some time in July. The consoles will run you $139.99 USD each.

Jason's been knee deep in videogames since he was but a lad. Cutting his teeth on the pixely glory that was the Atari 2600, he's been hack'n'slashing and shoot'em'uping ever since. Mainly an FPS and action guy, Jason enjoys the occasional well crafted title from every genre.
@jason_tas
Previous The Fantastic Four return to Yancy Street this August
Next DC bringing Wildcats back once again