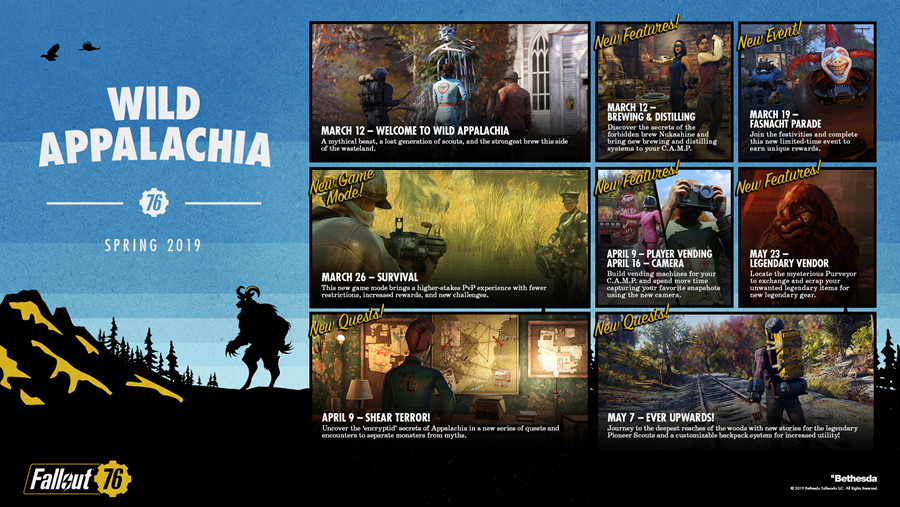 Bethesda talk the future of Fallout 76

It hasn’t exactly been a smooth going for Fallout 76. But that doesn’t mean that Bethesda is ready to move on. Far from it, from the looks of this 2019 road map.

Road to the wasteland

There’s still plenty of content coming to Fallout 76. Though honestly, it would have been understandable if you’d thought otherwise. Bethesda’s first multiplayer-centric Fallout game hasn’t exactly set the world on fire after all.

There were controversies surrounding everything from the lack of promised quality in the collector’s edition to an empty-feeling world once players dug in. But even with the issues, you have to give Bethesda some credit for working to improve the game.

According to their just-released road map for this year, there’s plenty to come. Maybe enough to win over those who’ve been a little disappointed thus far?

From there, gamers can expect to see Nuclear Winter in the summertime. And then we get Wastelanders come fall. That in particular sounds like it might be a winner, with new main quests included.

Bottom line, there’s plenty to come. And it might not be a bad time to start looking at Fallout 76 if you’ve so far been holding out.

Jason's been knee deep in videogames since he was but a lad. Cutting his teeth on the pixely glory that was the Atari 2600, he's been hack'n'slashing and shoot'em'uping ever since. Mainly an FPS and action guy, Jason enjoys the occasional well crafted title from every genre.
@jason_tas
Previous Tetris 99 with Friends is the Unfair Advantage You Need
Next First season of Krypton coming home March 5th

There is a lot happening in Vertigo Games’ After the Fall. For one thing, it’s …